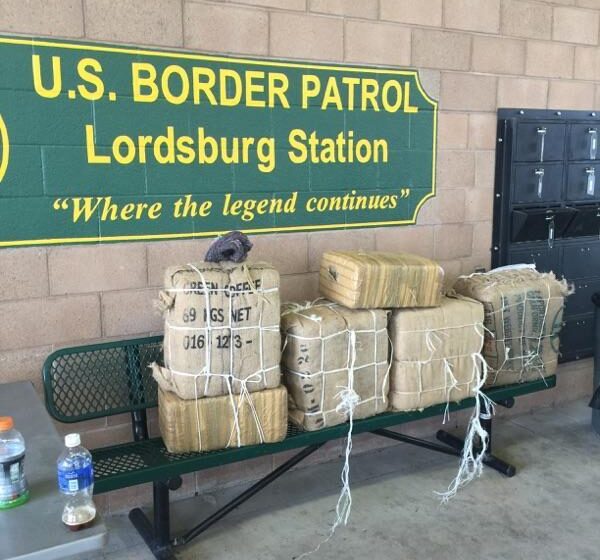 Early on September 2nd, Agents assigned to the Deming Station were patrolling on I-10 near mile marker 45 when they observed five subjects hauling backpacks making their way north from the U.S./Mexico border. Agents continued to monitor the individuals with night vision technology while additional agents were deployed to the area where the subjects were last seen walking.

As the Agents moved-in to effect the arrest, a Jaguar sports car with Arizona plates pulled up to the scene. Agents witnessed the suspects loading the backpacks into the trunk of the vehicle.

Two of the suspects got into the vehicle which sped away traveling west on I-10 at a high rate of speed, with the headlights off.  Due to the speed and reckless manner in which the Jaguar fled the scene, agents did not attempt to pursue the vehicle, but instead notified other law enforcement agencies ahead.

Ultimately, three subjects were apprehended, and 45 pounds of marijuana were seized.

A few hours later, a Border Patrol Agent in Lordsburg, New Mexico, came across an individual walking barefoot on I-10 near mile marker 31.  It was later determined the individual was the driver of the Jaguar encountered earlier, and evaded authorities.  The driver was identified as Ignacio V. Cuevas, 37, a United States Citizen.

Cuevas had sped off from the agents with the two other subjects with backpacks full of marijuana.

A helicopter from the Office of Air and Marine-El Paso Branch helped locate the abandoned vehicle south of I-10 near mile marker 31. The car still contained three backpacks with marijuana.

The Lordsburg Border Patrol Horse Patrol unit was also deployed and tracked the foot sign south toward Mexico, which led to the subsequent arrest of the two missing drug smugglers.

The five subjects, later identified as Paul Mercado-Herrera, 20, Nolberto Serrano-Barraza, 24, Henry Garcia-Aguilar, 19, Adrian Valles-Sosa, 26, and Uriel Mendez-Perez, 20, all from Mexico. They were transported to the Deming and Lordsburg Border Patrol Stations for further processing along with the burlap wrapped backpacks.

The total weight of the seized marijuana was 273.4 pounds, valued at approximately $218,700.  The contraband and the subjects were transferred over to the Drug Enforcement Administration (DEA).