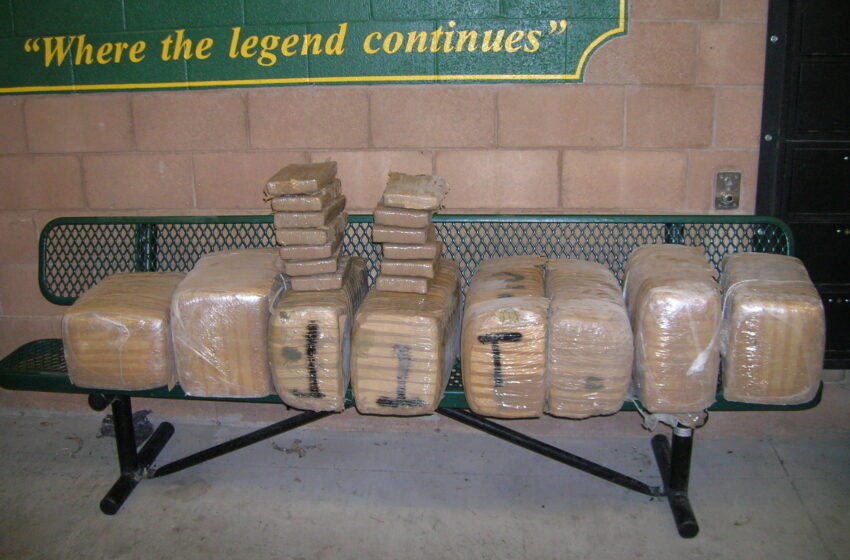 A vehicle pursuit through southern New Mexico leads to the arrest of an alleged car thief from Corpus Christi, Texas while Border Patrol agents working in Lordsburg snuff out multiple marijuana smuggling attempts this weekend.

On Saturday afternoon, a blue Honda sedan failed to stop for an immigration inspection at the I-25 U.S. Border Patrol checkpoint, north of Las Cruces. Border Patrol agents followed the subject north on I-25 while conducting a license plate check through dispatch. The query indicated that the license plate was linked to a vehicle that was reported stolen from Corpus Christi.

Agents notified local authorities as well as the New Mexico State Police for assistance as the vehicle raced along I-25 in an attempt to elude law enforcement. The Honda exited the interstate at the Highway 185 exit and headed west toward the village of Hatch.  The driver attempted to elude law enforcement by driving into an open field and over an irrigation canal which flattened three of the vehicle’s tires.

The subject made his way back onto Highway 185 but abandoned the disabled vehicle and ran to a residential area where he was quickly arrested by Border Patrol agents.  Records checks revealed that both the car and the license plate were reported stolen from Corpus Christi, Texas.  The driver, 39–year-old Gary Anderson, was placed under arrest for 18 U.S.C. 785 – High Speed Flight from an Immigration Checkpoint.  The stolen vehicle and license plate were turned over to the New Mexico State Police.

In a separate incident earlier that morning, agents from the Deming Station made a significant seizure of marijuana. Agents were monitoring the borderland west of Columbus using night vision equipment when they observed two men carrying backpacks traveling north. Agents and a canine unit responded and apprehended the two men, along with their backpacks.

The pair were transported to the Border Patrol station where they were identified as Mexican nationals; 19-year-old Esequiel Lujan-Erivez and a 15 year-old juvenile. They were allegedly carrying a total of 121 pounds of marijuana inside the backpacks with an approximate street value of $97,000.  Both smugglers and their contraband were turned over to the Border Operations Taskforce for prosecution and immigration proceedings.

Border Patrol Agents from the Lordsburg station seized over 484 pounds of marijuana in two additional incidents this past weekend. Sunday morning Lordsburg agents received a tip about a suspicious vehicle in the desert area from a concerned citizen. Agents responded to the desolate area but were unable to locate the suspect vehicle.

They continued their search and discovered six sets of footprints in the area.  Agents began to follow the footprints that led north from the border. After a four hour search, agents discovered four men allegedly attempting to conceal themselves in the desert brush as well as 17 small bundles of marijuana. All individuals allegedly admitted to being in the U.S. illegally.

Agents continued to follow two more sets of footprints and subsequently apprehend the other two men that had separated themselves from the group. They also allegedly admitted to being in the U.S. illegally.

All six,  along with the marijuana were transported to the Lordsburg station for processing.  At this time it was discovered that three of the members of the group were juveniles who will be removed from the U.S.

A total of 356. 85 pounds of marijuana was seized valued at $285.480. All three adult individuals were turned over to the Drug Enforcement Administration for prosecution.

Early Friday morning, agents were working in the boot heel of New Mexico were also able to seize three burlap backpacks of marijuana totaling 127.25 pounds with a street value of $101,800.