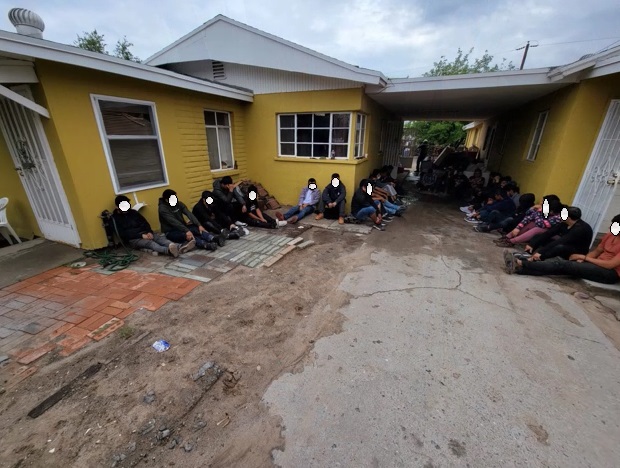 “Our El Paso Sector integrated targeting teams continue to disrupt human smuggling by transnational criminal organizations in our region,” said El Paso Sector Chief Patrol Agent Gloria I. Chavez. “We will continue to work together with other agencies to rescue these
migrants from these deplorable living conditions where they are held for long periods of time.”

According to officials, on June 30, Agents found 43 individuals trying to hide inside of a home in Sunland Park, New Mexico. Of
the 43 migrants, there were 25 Ecuadorans, six Mexicans, six Guatemalans, four El Salvadorians, and two Brazilians.

Agents found another stash house on the same day in central El Paso, with 22 migrants hiding inside of a home. Of the 22 migrants, there were 10 Ecuadorans, four Guatemalans, three Mexicans, two Nicaraguans, two Hondurans and one El Salvadorian.

All migrants in both stash houses were single adults who entered illegally into the United States and were trying to avoid detection.

Officials add that the El Paso Sector has seen a significant increase in the number of single adults crossing the border illegally in Fiscal Year 2021.

In comparison to the Family Unit Crisis of Fiscal Year 2019, there has been an increase of 261 percent for single adult encounters in Fiscal Year 2021 year to date. As of the end of May 2021, the El Paso Sector has encountered 86,536 single adults.

All 65 migrants were returned to Mexico in accordance with Title 42 of the United States Code Section 265.