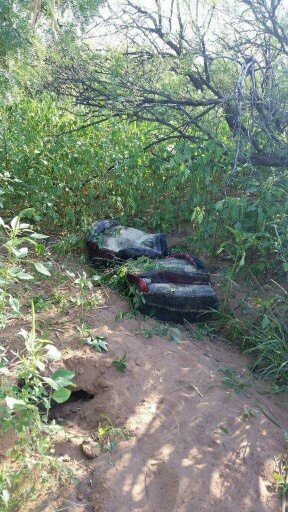 A records checks revealed that the 2011 Nissan Titan truck that the subjects were in was reported stolen from Truth or Consequences, New Mexico.  New Mexico State Police took custody of both individuals in addition to the truck.

[/lightbox]The three were identified as: 24-year-old Tomas Silva-Flaco of Mexico, 18-year-old Vidal Gonzalez-Armendaris of Mexico, and 22-year-old Oracio Ramos-Palmas of Mexico.  Each of the men freely admitted to their Mexican nationality.

The marijuana and the subjects were taken to the Lordsburg Border Patrol Station pending prosecution by the Drug Enforcement Administration.

One of the subjects was positively identified using the IAFIS/IDENT fingerprint system as 44-year-old Sergio Reyes-Alvares of Mexico. Reyes-Alvares had an extensive criminal history which included a conviction for a “Lewd and Lascivious Act with–a- Child in March 2012. he also had a prior deportation from the United States.

USBP official say Reyes-Alvares was booked into the Otero County Detention Center pending criminal charges for his illegal re-entry into the U.S.