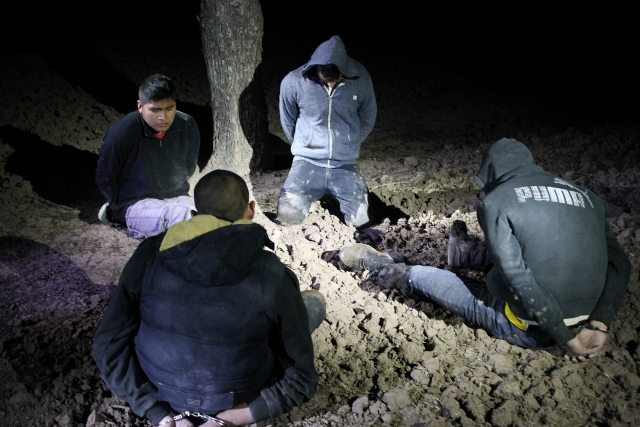 Border Patrol Agents from the Clint Station made six arrests and seized nearly 375 pounds of marijuana, which highlighted weekend drug activity in west Texas and New Mexico, as smugglers continue their campaign to push illegal contraband into the region.

On January 31, Border Patrol Agents assigned to the Clint Station were alerted to a possible illegal entry west of the Tornillo Port of Entry. Agents began tracking the smugglers through a local orchard when they encountered three of them trying to hide.

After making contact with those three people, agents used their tracking skills which led them to evidence of more suspected smugglers. A further search of the area revealed more subjects in hiding with what appeared to be backpacks of marijuana.

All six subjects told agents they were Mexican citizens, and one of them is suspected to be a juvenile. In all, 375 pounds of pot were seized, with an estimated street value of $300,000.

One day before the Tornillo-area seizure, Border Patrol Agents from Deming, N.M. used their sign-cutting skills to find two subjects who had made an illegal entry just east of the Columbus Port of Entry.

After locating them, agents found they were carrying two large duffel bags filled with suspected marijuana. Agents took the two individuals and the suspected contraband back to the station where a test kit verified the load to be marijuana. The total weight of the contraband was 107 pounds of marijuana worth an estimated $85,600.

The subjects were headed toward N.M. Highway 9. Agents noticed they appeared to be carrying large backpacks while making their trek north.

Agents intercepted the group, apprehending a total of five subjects. It was confirmed the packs contained marijuana and that the subjects had illegally entered the country.

The subjects were then processed and identified as Mexican nationals, and were transferred over to Drug Enforcement Administration.

Prosecution is pending on all the suspected smugglers.