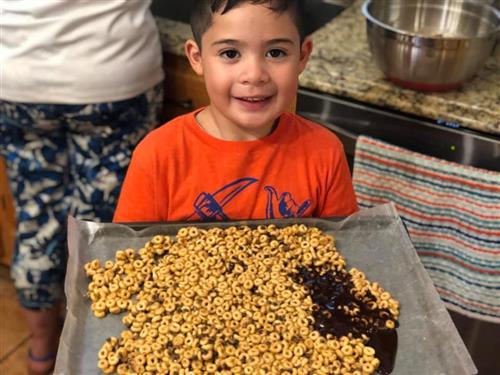 The Bowie teacher and chef, who runs the famous Oso Good food truck with his students, began offering the camp in the summer to kids age 4 plus and their parents interested doing a virtual class together.

“I had plenty of parents from the previous Camp Puga telling me the positive effects this camp had on their kids,” Puga said. “They looked forward to cooking with me and even helped a lot of kids with learning challenges open up and want to be involved with something different.”

He’s found that learning to cook – especially during COVID – has been both healthy and academically good for kids.

“During these difficult times, it is most important to keep kids mind of the negative this virus can bring to the community and help lift some spirits while having some fun in the kitchen,” he said.

Teaching kids to cook at a young age also encourages them to want to learn to do things independently.

“A lot of the times we may discourage a kid from doing something like cooking because we believe their ability to do so may be low,” Puga said. “But after having these classes, more and more of the campers have proven an interest not only in cooking but wanting to do the recipe on their own. Not only is this a physical skill that it’s helping with, but a mental and emotional skill.”

He hopes to attract more EPISD teachers to get their elementary-age students involved in this round of Facebook classes.

“It would allow the students to try something hands-on while at home with their family and teachers can follow up with the student and their family the following Monday,” he said.

Families interested in participating in the Facebook event by logging on to @Culinary Camp Puga at 6 p.m. on Nov. 8. Participants will need the following ingredients: