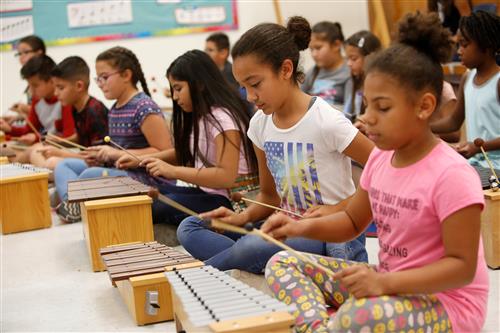 “Jingle Bells,” the standard Christmas carol, has been playing in the halls of Bradley Elementary School every Thursday for weeks.

No, it’s not another sign that the holiday season is arriving earlier and earlier each year. It’s actually Teacher Alison Bocanegra and students participating an innovative approach to music education.

Bradley’s Orff Ensemble — which uses a teaching method that combines music, movement, drama and speech to create a child-centered way of learning — has been practicing for a performance with the school’s orchestra next month.

The group was formed last year after Bocanegra saw how successful the Orff approach was with her students.

“My fifth-graders were really, really good,” Bocanegra said. “Seeing how much the kids enjoyed it, I thought it would be a great to have an Orff ensemble afterschool.”

Bocanegra, who is certified in the Orff Approach, sees a noticeable difference when students focus on learning music through movement and echoing.

“It’s not so much about music theory or reading notes. It’s more about doing it before you can even read the music,” she said.

German composer Carl Orff developed the teaching method in the 1920s to facilitate music education for children. It approaches music instruction in a similar way children approach playtime, resulting in greater appreciation of music and deeper exploration into instruments.

“Younger kids can get frustrated when they are trying to learn the notes, but when you teach through movement and speech they can do it,” Bocanegra said. “It teaches them to work together and listen to each other.”

The group of third, fourth and fifth-graders assemble in sections, similar to how an orchestra is arranged with the higher pitch

instruments in the front and basses in the back. Instead of traditional instruments, students use Orff instruments, such as xylophones, metallophones and Glockenspiels.

Fifth-grader Michael Cicala was looking for something to do afterschool, so when he heard about the Orff ensemble he signed up.

“I think it’s cool to learn music. I enjoy playing the xylophone,” he said. “My favorite song is Santa’s Helpers because I like the end.”

Fellow fifth-grade student Shaylah Lewis is excited to perform, even after only four practice sessions.

“I joined because I love music and playing instruments,” Shaylah said. “I really like the deep sounds when we play. The biggest thing I have learned is that we have to work together as a group.”