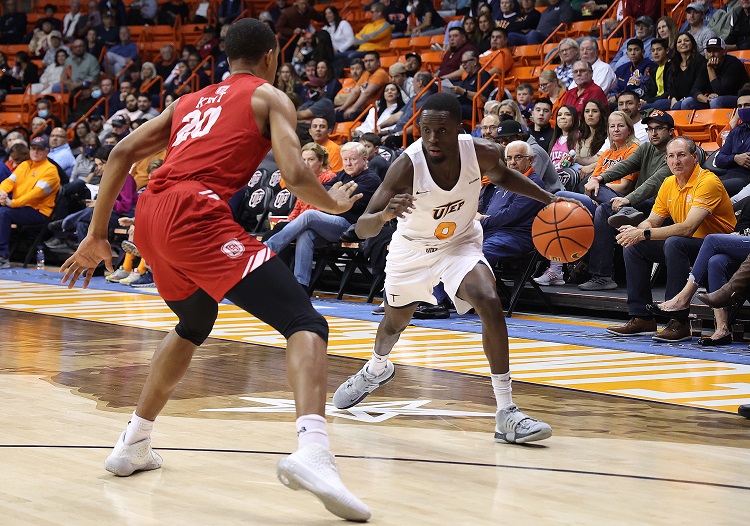 The 4,000+ fans in attendance at the Don Haskins Center were treated to a game that was not decided until the final 10 seconds of the game. Unfortunately for the Miners they failed to win what would have been their 33rd Sun Bowl tournament.

The conclusion of the nation’s oldest holiday collegiate basketball tournament also marked the end of non-conference play for UTEP in their 2021-2022 season.

Jorell Saterfield and Keonte Kennedy who were the leading scorers on the night for UTEP spoke with the media. The disappointment was evident on their faces and their answers were short. Both said that the team’s shots did not go down when they needed to, giving credit to Bradley and saying they need to keep working because they know this team is full of potential.

Bradley head coach Brain Wardle addressed the media after the game. He said he did not know he had obtained his 100th win with the Braves. As for how the win came about, Wardle said, “We were fortunate to come out and make some big shots and plays in the last five minutes. Which is something we weren’t able to do earlier in the year so I’m proud of our guys.”

UTEP head coach Joe Golding said he was proud of his team and their effort, but also acknowledged that they ran out of bodies down the stretch (with Agnew and Kalu fouling out) all while giving all the credit in the world to Bradley.

As for making an analysis of his team going into conference play, with all the adversity and circumstances this team has been presented with (players out with COVID, concussions, food poisoning, etc.) in the first 12 games of the season, Golding was direct saying, “I think there is still a lot of questions out there (about his team) you would hope that at this time (of the season) you would have those answers. You think about tonight, we had a lot of lineups we don’t usually have, so you’re trying to run plays when you haven’t had time, behind the scenes to practice those plays with those guys.”

UTEP will now have a week to rest and then prepare for the start of Conference USA play. The Miners will start conference play with a pair of road games in the span of three days facing University of Alabama-Birmingham on Thursday December 30th then Middle Tennessee on January 1st