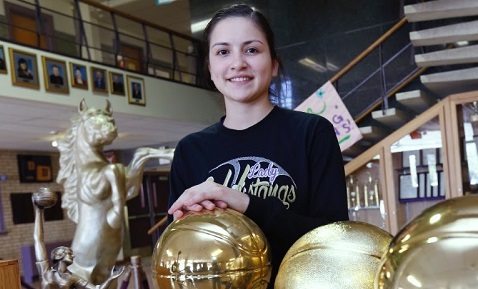 The basketball season ended for Burges point guard Natalie Sanchez, but her senior year as a Mustang player will not be done until she reaches the NCAA Final Four in Phoenix this weekend.

Sanchez won the #Dreamfearlessly Fan Vote competition, an online voting contest that guaranteed her a spot to compete at the American Family Insurance High School Slam Dunk and 3-Point Championships this weekend.

She beat Bethany Wolph, from Valley Christian in Arizona, with a 56 percent vote in the final bracket.

“I was actually coming back from spring break when my mom sent out a message that I had won,” Sanchez said. “I felt good. I am a little nervous for what’s coming up, but it feels good to represent El Paso.”

Sanchez is thankful to the Burges community and especially her family for voting for her during the competition.

“They constantly texted me reminding me to vote, so I would go vote and check,” Sanchez said.

The senior will compete against five other competitors in the nationally televised event, which will air on CBS during the Final Four weekend on April 2.

“I am looking forward to competing against other great shooters. It’s going to be a great experience,” Sanchez said. “I’ve been practicing since last Thursday. Just trying to find my shot since my last game.”

Coach Cynthia Hernandez has been working with Sanchez, setting up basketball racks to practice for the competition. She is excited to cheer her on from the stands.

“I’m going to be there so I get to see her compete in person,” Sanchez said. “It’s awesome. It’s a great opportunity for her and for Burges. It’s a good way to promote to our students, school and EPISD.”