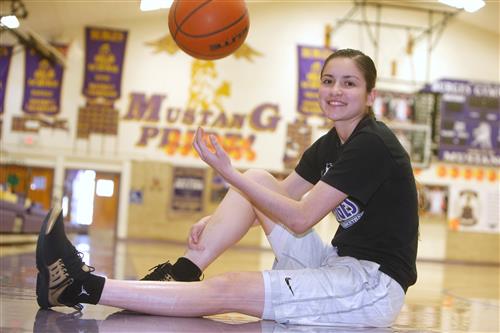 Burges basketball player Natalie Sanchez is competing against the top high school 3-point shooters in the nation for a chance to attend the Final Four in Phoenix and she needs your help to get there.

“It feels good to be representing Burges High School in this competition,” Sanchez said. “It’s humbling as a kid from El Paso. Who would ever think of that?”

The player with the most votes in each bracket will be deemed a grand prize winner and receive an invitation for a roster spot at the 2017 American Family Insurance High School Slam Dunk & 3-Point Championships, held annually in the Final Four host city. The event will air on CBS during Final Four weekend in Phoenix on April 2.

Head coach Cynthia Hernandez believes Sanchez is a great asset to the basketball team and is proud of the point guard for competing in the national contest.

Sanchez’ accomplishments are what helped her be selected for the national contest. A committee of judges selected the contestants based on their demonstrated skillset, high school stats, character and leadership qualities. Once selected, players had to submit a highlight reel to post on the competition website and garner votes.

“She’s the only student from El Paso selected, and I believe she’s the only one to ever be invited,” Hernandez said. “It’s going to be nationally televised event that can promote our kids, our school and EPISD.”

Sanchez is excited about the contest, which serves as another milestone in her love of the sport. Basketball has always played an important role in her life from a young age. She joined a youth basketball league at four-years-old, falling in love with the competitiveness of the game.

“My brother, cousin and I joined a basketball league, and that’s how I started.” Sanchez said. “I liked everything about it. I like scoring points. I like taking the ball from other players.”

She has continued cultivating her passion at Burges High School, playing on the team since her freshman year.

“From my first year until now I have seen how much basketball means here in El Paso,” Sanchez said. “Making it to playoffs makes you grow as a person and as an athlete. It makes you care more for the sport and work harder on your game because there are people out there that are better than you and ready to beat you. The biggest thing I have learned is to have confidence in team, my coaches and myself.”

To vote for Natalie Sanchez, visit www.highschoolslam.com and select her name in the Women’s 3-Point category.