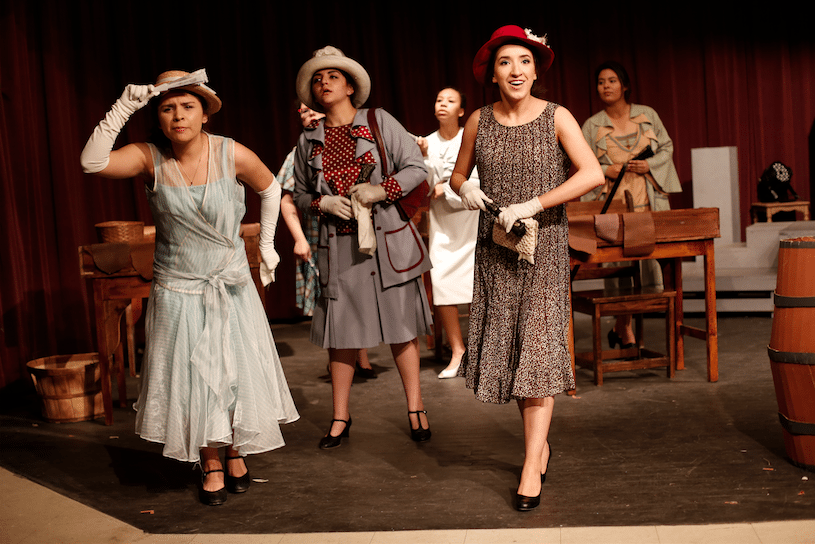 The Burges High School UIL One-Act Play troupe may have won a recent tournament in Snyder, Texas, but that doesn’t mean the student thespians are taking a break from rehearsals.

For the second straight year, the Burges theater group will compete in the University Interscholastic League regional tournament on April 21 in Lubbock for a chance to make the state tournament.

“I’m very proud of these kids and their accomplishments,” theater teacher Fernie Arana said. “Whatever happens from here is gravy, although state would be the ultimate for us.”

“These kids have consistently done very well in the last 14 years, competing at area, regionals or state,” Arana said. “Last year we were one of the top eight schools in the state of Texas and number one in our region.”

The students performed the Pulitzer-winning play “Anna in the Tropics,” which is written by Cuban playwright Nilo Cruz and is the first Latino-written play to win the honor in Drama.

“I thought it was a great play for us to research. These kids have definitely done their homework,” Arana said.

They play explores Cuban-American culture through the lives of cigar factory workers in Florida. The owners hire a lector to read plays and classical works to the workers, many of which did not know to read or write.

“That is something we have learned throughout this whole journey. The Latino culture has always put an importance on education,” Arana said. “It was something we need to celebrate and a story that needed to be told in our community.”

Student Salvador Mendoza took to heart some of the lessons the characters learned in the play.

“The biggest thing I have learned is that you can’t let jealousy or impulses guide your actions. You should think things through,” Mendoza said.

The senior hopes his time at Burges and all the competitions he has participated in will help him when he graduates and studies theatre in college, but for now he is focused on the regional competition.

“I feel a little nervous, but I am confident in our company that we will be able to come together and give our best performance,” Mendoza said.

Senior Hannah Perches found a personal connection to the play in one of the work’s main themes – the importance of family.

“It’s important to be there for your family when they need you,” Perches said. “I have also learned dedication. You not only have to work hard to keep up your grades in school but also work really hard at rehearsals and do the best you can,” Hannah said.

Working hard is something the Burges students know to do, rehearsing everyday after school and sometimes on the weekend, despite other

“These kids are in organizations ranging from Honor Society to athletics, and some even have jobs,” Arana said. “We work around their schedules and try to balance everything.”

Arana believes the arts are essential to the growth of EPISD students.

“They are not just athletes or students, they are artists, and they are well developed,” Arana said. “I think that says a lot about our district. We are concerned about these students as a whole.”

Junior Aaron Palacios agrees. He has been in theatre for two years, and he has seen a real difference in himself.

“Theatre is definitely a confidence booster. As an actor you are forced to be confident because you go on stage in front of a large audience,” Palacios said. “Not only that, but the discipline in our theatre makes us better students and better people.”