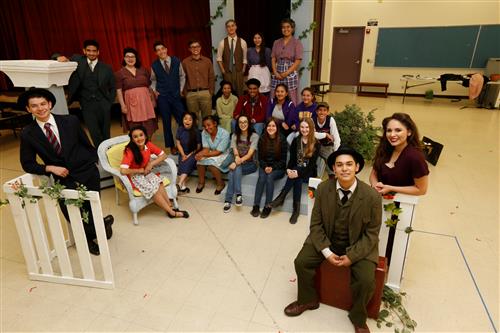 Burges High School theater students earned a spot in the one-act play competition with their rendition of Arthur Miller’s “All My Sons.”

The 15-member troupe will stage the one-act play one last time in Round Rock as they compete against seven other high schools this week for state honors. It is the second time Burges has earned a trip to state in one-act in three years.

The story takes place in the late 1940s and centers around Joe Keller and his guilt for his role in shipping defective airplane parts to the Air Force causing the death of 21 pilots. Keller justified his actions by saying he did it for his family.

“We’ve come so far, working day in and day out,” said Apodaca, who will be making his second trip to state. “And it has paid off.”

Arana draws who may not ordinarily be comfortable on stage and molds them into solid actors.

“Mr. Arana breaks down barriers and gets students where they need to be,” Apodaca said.

Arana, who has been teaching at Burges for 15 years, has taken students to state in one-act five times and to regionals 12 times.

“It is a privilege and honor to go to state because these kids have been working hard all year long,” Arana said.

He has instilled in his students a solid work ethic and goal-setting to keep them focused and improving. For him, the Arthur Miller play is about setting a solid foundation with the classics.

“There are true life lessons in these classic plays,” he said. “They can apply them in their life as they grow.”