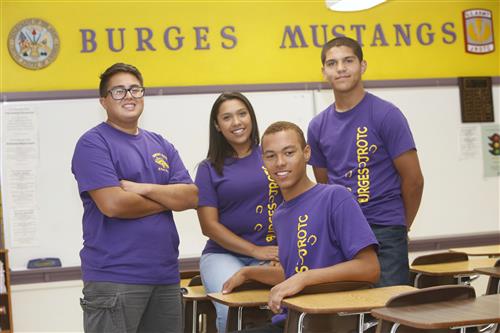 Four JROTC students from this East-Central school packed their bags for a trip to Washington, but this was no vacation.

The incoming seniors competed in the 2018 Army JROTC Academic Bowl, also known as JLAB, where they won two of the nine competitions there and ranked among the top 3 percent of all JROTC teams in the country.

“It’s a great honor to represent Burges JROTC and EPISD on a national level,” said JROTC instructor Jose Hernandez. “Our motto is ‘Our discipline got us started, and our passion keeps us going.’ That’s what got us this far.”

The competition officially started last November with more than 1,000 teams participating in Level I and Level II. Only the top 32 teams are chosen to compete at the championship.

“I believe we have a really strong team,” Hernandez said. “They know who’s good at what so they each can focus on their individual subjects.”

Cruz, who has been in JROTC the last three years, joined the academic team his sophomore year.

“As far as I know, this is the first time Burges has qualified for a competition like this,” Cruz said. “So, we are hoping this sets the standard for years to come.”

The team has been preparing by watching competitions from previous years and studying nonstop.

“It’s very rewarding because when we first started we didn’t expect to get this far,” Jimenez said. “We have been going over study material online. There’s nothing specific to study for because they will ask you anything from bodies of water around the world to Greek mythology. You really just have to be prepared for anything.”

Camilla de Leon excels at language arts – something she puts to good use as part of the academic team.

“Since we are not given specific things to study, we would get together and study things we are learning in class,” she said. “We also would drill each other on facts, anything from math, English, history and current events.”

For fellow teammate Jeremiah Davis Bell, the team has become much more than just academic achievement.

“We all have our own individual strengths, and we help each other however we can,” he said. “We are like family. We are brothers and sisters.”

He hopes the competition will help showcase the school.

“It feels awe inspiring to represent the District,” he said. “I see it as a chance to show other schools around the nation that anyone can make it if you put forth the effort.”