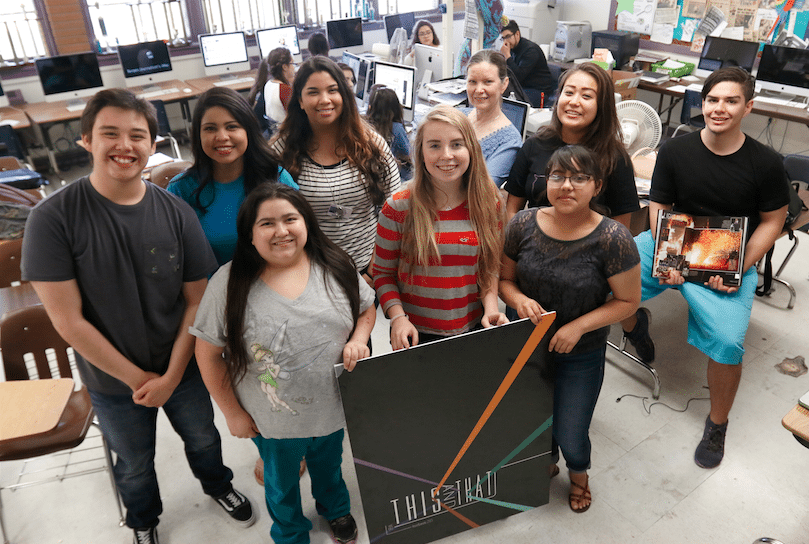 Hoofbeats, the Burges High School yearbook won its seventh Pacemaker Award, a national accolade that is often referred to as the Pulitzer Prize of high-school publishing.

The award is given by the National Scholastic Press Association to high-school journalists who have excelled in online publication, newspaper, yearbook, magazine and broadcast. It is considered the top award for high-school publications.

For senior Jordan Steyer being part of an award-winning yearbook staff strengthens her resolve to study journalism at the University of Texas at Austin this fall.

“It’s great to be part of this staff and win such a prestigious award,” Steyer said. “The award brings national recognition not just for our yearbook staff but also our campus.”

Steyer hopes to use what she has learned in yearbook to succeed in college, where she plans to hone her writing and editing skills.

“I have learned the importance of organization, patience, and just the ability to deal with a lot of things at once,” Steyer said.

Senior Jonathan Castro will also attend UT-Austin in the fall and strengthen the graphic design skills he learned in high school.

“I have developed skills for the future. It’s something I am good at, and I am going to pursue in college,” Castro said. “The fact that we won the Pacemaker just cements my decision.”

The students feel the book’s bold design set their yearbook apart from the more than 300 entries.

“We always use clean and neat designs, but with the last two books we have been thinking more out of the box and taking more risks,” Castro said.

Ideas for the book’s design and theme come during brainstorm sessions during the summertime. The staff also does research and watches for trends in the media before solidifying their concept.

“I knew it was an excellent book and that it would win an award. I get the satisfaction as a teacher to look at this beautiful thing they created,” Monroe said. “We never tire of winning, but we look at it as a way to do things even better the next year and how we can continue to improve.”

Junior Jasmine Tabler looks forward to the next year when her responsibilities for putting the 2017 book together and her journalistic knowledge grow.
“I feel like I played more of a role in this yearbook as assistant editor. My contribution made an impact,” Tabler said. “I love everything about yearbook, but it has really made me a stickler for details.”

Monroe knows this attention to detail will stay with the students the rest of their lives.

“They get to learn on the job. Journalism is one of the best professions to teach life skills,” Monroe said. “They have to not only learn to write, design and take photos but most importantly learn to talk to people and work hard as part of a team.”

The Pacemaker has given the staff a boost of confidence and encourages them to continue growing as writers, designers and photographers.

“Yearbook helped me decide what I wanted to study,” Tabler said. “Winning an award like the Pacemaker just helps reassure me to keep working toward something I really want to keep doing.”