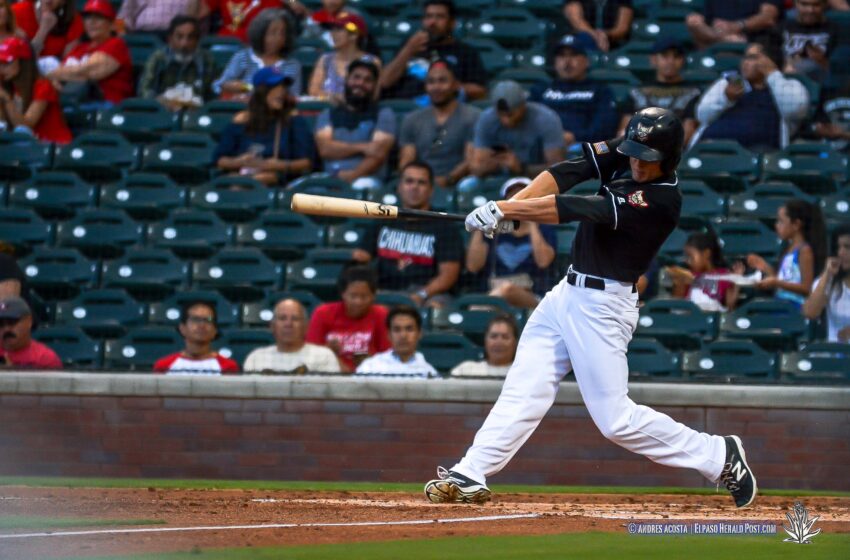 In only the Chihuahuas’ fourth year of existence they are now impressively in the hunt for the divisional crown for the third season in a row.

Nick Buss has spent the 2017 season quietly putting together one of the best years at the plate a Chihuahua has ever had.

As of August 22, Nick Buss was leading all of the PCL in batting average with an outstanding .351 mark with just 13 games left to play down the stretch.  He was also named as El Paso’s sole representative at the Triple-A All-Star Game in Tacoma earlier this summer, where he went one-for-two against the best pitchers the league has to offer.

“It was really nice up in Tacoma.  They have a beautiful venue up there.  The game itself was a lot of fun.  They had a great crowd with a fun energy and overall it was a great experience,” Buss said of his second career trip to the Triple-A All-Star Game.  Buss was also selected to the Triple-A Mid-Season and Post-Season All-Star teams in 2013 when he played for the Albuquerque Isotopes.

While multiple Triple-A All-Star selections highlight Buss’ accomplishments at this level, he’s had his fair share of successes at the Major League level, too.  Buss has played with both Los Angeles big-league clubs in his career, with the Dodgers in 2013 and the Angels just last year.

“In 2013, when I was up with the Dodgers, they pretty much had the NL West locked up.  They knew they were going to the postseason and so I got to stick around as one of the extra guys during the playoffs, which was really fun.  The Dodgers were selling out all of those games, and it was probably some of the more memorable baseball I’ve ever been a part of,” Buss recounted.

“Playing with the Angels last year was great in its own way, because I got the chance to start a little bit more there and I got more of a feel for what to expect up there in the Majors.  Both places were awesome places to play.”

While playing in the Majors, Buss had the distinction of besting some of the greatest pitchers in the game, as both his first Major League hit and home run came off of former Cy Young Award winners.  Buss made his MLB debut on September 14, 2013 with the Dodgers in Dodger Stadium against the Giants, where he notched his first big league hit with a single off of two-time Cy Young winner Tim Lincecum.  A few years later, on August 23, 2016 when he was up with the Angels, Buss hit his first big league homer off of the Blue Jays’ R.A. Dickey.

“At the time, you’re just trying to get your knocks.  The last thing I was thinking about at the time was that I was going against a Cy Young guy,” Buss admitted.  “You’re just up there trying to hit something hard, and hopefully you end up with a hit.”

With the season rapidly drawing to a close now and the Chihuahuas playoff race heating up, Buss touched on what the mood is like in the

“I’ve been on teams that have been completely out of it this time of year, and I can definitely say it’s a lot more fun to be on a team that’s competing for a playoff spot.  The nature of the season is so long that still being in the mix at the end is really important because it keeps everyone a little more focused and a little more driven and the games are way more fun because you’re playing for something every night.”

In the last five seasons Buss has played with five different PCL teams—three of which are in the Chihuahuas division—which may attribute to some of the success he’s had at the plate this year.

“To some extent it’s great to have that experience,” Buss said.  “It’s nice to walk into all these stadiums and be familiar with the surroundings and the teams.  I’ve faced a lot of the pitchers before, which there’s definitely some advantage to.  It’s been strange to have played with all these different teams all in the PCL, but maybe in some way it has been helpful.”

Now, in the final two weeks of the season, it’s not only the Southern Division race that hangs in the balance, but also Buss’ quest for the PCL batting title.

“It’s exciting…but you don’t really think about it, to be honest,” Buss added.  “You’re just trying to do the best you can every day and whatever happens, happens.  I’m just trying to have good games every day and if that contributes to a higher average, then that’s great.”

The Chihuahuas had their last off day of the season on Wednesday before beginning their final homestand of the 2017 season on Thursday against the Sacramento River Cats.  Come down to Southwest University Park, be a part of the action, and cheer on Nick Buss and your Chihuahuas as they both close in on their respective titles as another season draws to a close.