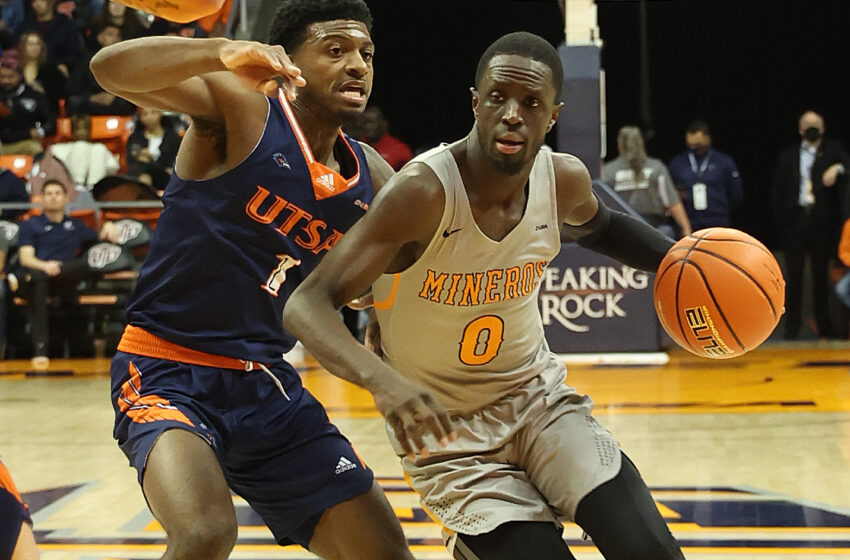 Bieniemy’s double-double was the first on the year by a Miner. He also paced the team in points, rebounds and assists, becoming the first UTEP player to achieve that feat since 2017 (Keith Frazier).

“I thought we were really good defensively today.” UTEP head coach Joe Golding said. “I thought overall it was a good defensive effort. At the end of the day we found a way to win, and you have to celebrate that.

“We got to 59 (points) and found a way to win the game,” Golding said. “You’re going to be in close games in this league. We are finding different ways to win games. (Give) credit to our guys. Adversity makes you strong, we’ve been tested on that this year. Our guys have stuck together and they deserve this (victory).”

Jamari Sibley (career-high five blocks) and Tydus Verhoeven (four rejections) accounted for all but two of the swats in the contest for the Orange and Blue. The Miners also shared the ball well with 14 assists on 21 made field goals.

It was a 6-6 game early on before seven straight points, including an alley-oop from Bieniemy to Ze’rik Onyema that forced a timeout from the home side at 15:45 in the first half.

The Miners were just getting started, though, eventually running off 13 points in a row with the lead swelling to 13 (19-6, 11:58 1H). UTEP had three dunks total in the sequence (two from Onyema) and one from Bieniemy. Defensively the Miners’ pressure forced six turnovers to ignite the surge before UTSA tried to claw back with back-to-back baskets but Verhoeven countered with a beautiful baby hook shot in the paint put it back to double digits (21-10, 7:46 1H).

It was essentially back-and-forth the remainder of the half with the Miners responding to every attempted run by the Roadrunners. Saterfield was instrumental with big treys on multiple occasions each time UTSA appeared poised to answer, including a trey in the final minute of the half to make it 30-20 UTEP heading into halftime. That marked UTEP’s largest road halftime lead of the season.

Verhoeven hook’s shot halted the push (44-40), but the Roadrunners scored on the next possession. Alfred Hollins’s free throw made it a three-point lead 45-42, followed by a huge rejection from Verhoeven.

After another stop, Bieniemy sank a runner in the lane to put UTEP back up five (47-42, 5:38 2H). The shot came as part of late 13-2 run that essentially sealed the deal for the Miners.

Riding its second three-game winning streak of the season, the Miners return home to play host to Florida Atlantic on Jan. 27 at 7 p.m. Jon Teicher (41st year) and Steve Yellen (19th year) will be on the call for, which can be followed on the “Home of UTEP Basketball” 600 ESPN El Paso, the UTEP Miners App and C-USATV.