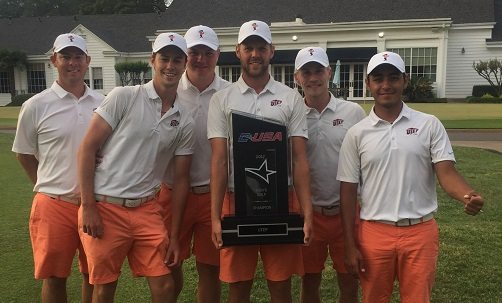 It is the first conference title since 1985 and only the second in program history. The Orange and Blue also punched their ticket to the NCAA Regionals for the first time as a team since 2004.

It was the fitting conclusion to the three-day event for the Miners, who notched the top seed in match play after their first-place showing in stroke play (15-over 879; 287-294-298).

“You have a lot of moving parts going on,” sixth-year head coach Scott Lieberwirth said. “It’s tough to judge [the match]. The best part is we got the first two points on the board. Knowing that we had leads in two other matches, we knew we just needed to hang on and close out one of those matches.”

Battling in a match that was too close to call early, Nicklas Pihl got the Miners off to a solid start in the championship vs. Charlotte. The match with the 49ers’ Conor Purcell was all square through eight holes before Pihl found another gear. He won two of the next three holes to go 2UP through the 11th hole, and Purcell could never recover.

UTEP pushed its team advantage to 2-0, thanks to Charles Corner knocking off the 49ers’ Matty Lamb, 2UP. Corner started fast by taking the first two holes, an edge he maintained through the turn. Lamb’s comeback started on the back nine with wins at both 10 and 13 to make the match all square. Corner remained steadfast, winning both the 15th and 18th holes to put Lamb away.

Charlotte tried to claw back into the championship with Tyler Young edging Aaron Terrazas, 1UP. The match was all square through 15 holes but Young found the necessary separation after carding a 3 and Terrazas recorded a 4 on the 17th hole. Both golfers fired 4s on the 18th hole to give the 49ers a team point.

The lone senior on the team Frederik Dreier then took center stage. The reigning C-USA Golfer of the Year was in a back and forth match with Charlotte’s John Gough. All squared through 10 holes, Dreier won three of the next five holes to take control of the dual. Gough claimed hole No. 16 to get within two, but Dreier prevailed, sending the Miners into celebration.

“It was very emotional,” Dreier said. “This being my last conference [tournament] ever and to win it with the guys was amazing.”

Those sentiments were expounded upon by Lieberwirth.

“I think fittingly, it was Frederik Dreier’s match that clinched it for us, him being a senior, him being the reigning Conference USA Player of the Year,” Lieberwirth said. “It couldn’t have been a better ending for us to have Freddie finish it.”

Andreas Sorensen lost the first two holes to the C-USA individual medalist Seth Gandy before a stunning reversal. He squared with Gandy by the fifth hole and vaulted out to 3UP through hole No. 13. Gandy’s rally came too little, too late, as Sorensen won 1&2.

The Miners made it to the final round of match play after a hard-fought 4-1 win over Southern Miss. The tournament was shortened a day due to a forecast of inclement weather on Wednesday.

“It [weather] forced us to have to play two rounds in back-to-back days, which is something we never do,” Lieberwirth said. “Without question, fatigue was a factor for both teams. We were fortunate to get to that championship match. It’s difficult for everybody involved, but our guys fought through it, they continued to play well throughout the afternoon. They just did a great job.”

Pihl set the tone against the fourth-seeded Southern Miss Golden Eagles with a 3&2 conquest of Walker Kesterson. It was all squared through the opening six holes before Pihl won two of the next three to make the turn 2UP. The Golden Eagle briefly cut into the lead on hole No. 11, but Pihl recovered immediately on No. 12 and never looked back.

Sorensen raced out to a huge lead, taking each of the first five holes from the Golden Eagles’ Derick Kelting. The margin remained five heading into the 13th hole, before Kelting mounted a rally, winning four of the next five to make the dual tight going into the 18th hole. Sorensen did not flinch however, matching Kelting with a 4 and winning the dual.

As it turned out, that proved to be the lone team point in the match for Southern Miss. The Miners clinched the team win thanks to Corner’s 1UP vanquishing of Matt Lorenz. Terrazas downed Matt Codd 1 & 1 to punctuate the victory.

Corner quickly dug himself an early hole, with Lorenz jumping out to a 2UP lead through three holes. Corner responded brilliantly, tasting victory on six of the next seven holes to stand 4UP through the 11th hole. Lorenz fought back and eventually clawed back to all square through 17 holes but Corner won the 18th hole.

It was a compelling match between Terrazas and Codd, with action all square through 16 holes. Terrazas found a way to get it done, though, carding a 3 while Codd was saddled with a 5 on the 17th hole.

The NCAA Regionals are slated to begin on May 15.

“I feel like we have got a lot of grown men,” Lieberwirth said. “They act mature, I think they play the game the right way and I think they act the right way, which is something that we want from our program. I couldn’t be any prouder than I am right now.”