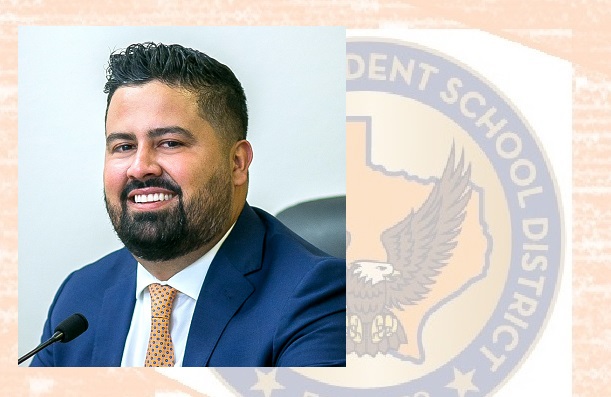 The Canutillo Independent School District (CISD) Board of Trustee Armando Rodriguez was recommended by the Texas Association of School Boards (TASB) Nominations Committee to serve as incoming Second Vice-President of the Board of Directors for the 2021-22 term.

“It is an honor to once again represent Canutillo and champion for public education at the state level through this latest leadership opportunity with TASB,” Rodriguez said. “I will continue to work to provide opportunities and advancement for all Region 19 students.”

Rodriguez is serving his fifth term on the CISD Board of Trustees, where he has served as secretary, vice-president, and president. He is an alumnus of Canutillo High School and The University of Texas at El Paso. He has been a leadership trailblazer as one of the youngest elected officials in El Paso County and the first El Pasoan to serve as a TASB officer since 1998.

Rodriguez’s nomination as Secretary/Treasurer was historic for the El Paso region because he was the first trustee from Region 19 to serve as an officer on the TASB Board of Directors since David Sublasky of Fabens ISD in 1997-98. Before then, only two other El Paso area trustees have served as TASB officers – Ross Borrett, Ysleta ISD, 1975-76; and Ted Andress, El Paso ISD 1958-59.

Rodriguez is recognized among school trustees in the region as an advocate for public education, educators, and underserved students. As a CISD Trustee, he has played a key role in modernizing Canutillo schools.

Some of the accomplishments while on the Board include the establishment of Northwest Early College, a National Blue Ribbon School and one of the best high schools in the country according to U.S. News & World Report; the creation of the Canutillo Connect initiative that bridged the digital divide in the community; and the back-to-back A rating for the District by the Texas Education Agency – the only District in the region to achieve this distinction.

In addition to his recent TASB officer nomination, he currently serves as the Region 19 Representative on the TASB Board of Directors.  He also serves as a member of the Board of Directors for the National Association of Latino Elected and Appointed Officials.

TASB is the state’s largest public-education advocacy and support organization.

Recommendations of the new slate of incoming officers will be submitted to the TASB Delegate Assembly and elected into their new positions at the conclusion of the Texas Association of School Administrators/TASB Convention.