Late last week, the El Paso art community organized an event to help pay the expenses of local jeweler Miguel Quintana, as he was recently diagnosed with stage 4 lymphoma.

“The last thing anyone should have to think about while fighting for their life is the number of medical expenses piling up,” reads Miguel’s GoFundMe.

The event took place in Casa Ortiz –  a space for local young artists in the Borderlands to display their creations and have room to express their art. The creative space is located right in front of Three Missions brewery in Socorro, Texas, a business that also supported the cause.

The organizers Carolina Villareal, one of the artists who has a space in Casa Ortiz and a UTEP student, and Veronica Fox, an local event planner invited local artists, bands, and Casa del Humo, a food truck to be part of the fundraiser event.

The event also included a silent auction with pieces donated by artists part of Casa Ortiz.

“I’ve known Miguel for about three years… we went on a trip together to Texas Tech… we have insight jokes together… After he got sick I could not see him and that broke my heart,” said Villareal.

The organizers went from booth to booth distributing business cards with the name of the event and the QR that directs to Quintana’s GoFundMe campaign for the attendees who were interested in pitching in.

Miguel Quintana is a double majored graduate in Graphic Design and Metals. He is hopeful he can combine his talent to combine his craft with different types of techniques.

In an interview via social media Quintana expressed his excitement to see the art community, contribution toward his treatment and hopes for eventual recovery.

“I was really emotional. After receiving the news about my cancer I felt really numb to my situation. I’m living through something that is out of my hand and so I can only tell myself to take it day by day,” said Quintana.

Not too long ago Quintana started his career, nonetheless despite the short period he feels more than welcomed in the community.

“Being a relatively new artist on the scene, all the support has made me realize that I am part of a community. I feel a self of belonging [to the community],” said Quintana.

He followed the event on social media from his hospital bed.

Developing supportive relationships when going through challenging situations like Quintana’s can be beneficial in many ways. Quintana expressed gratitude for the contributions fellow artists created to honor him and help pay for his treatment.

“There is definitely some magic in that place cause every time I’ve gone it’s been nothing but good laughs, good times and good sales,” concluded Quintana. 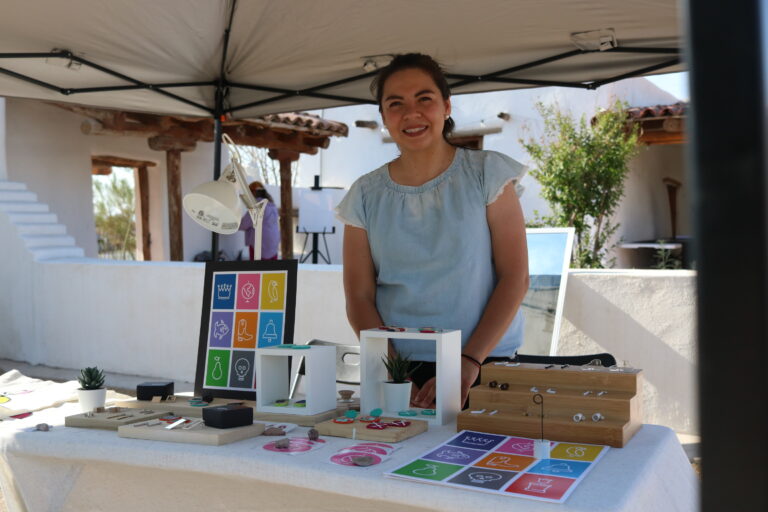 Gabriela Alvarado was one of the first artists who put up her tent. Alvarado is Quintana’s closest friend.

Alvarado runs her small business, gam. jewelry, designing and selling earrings, she specializes in silver and powder coloring. She made some stickers that read “F*ck cancer,” dedicated for the event.

Quintana and her became friends after she arrived from Mexico City pursuing a higher education in El Paso Quintana became a fundamental block in her life and according to her it was important to support his beloved friend.

“We studied metals [at UTEP] together, and he [Quintana] always supported us,” said

She said it was her time to support Quintana for the several times he helped her out starting her journey in a new city.

She saw this event not only as a way to support her friend but also for other artists to help spread the word about their craft and build connections.

“We can all support “Mike” doing what we love,” concluded

The artists’ booths offered a wide variety of creations made by them from stickers, purses, tarot readings, to dried fruits.

Right in a corner there was the booth of Jess Rivera, a passionate tarot card reader surrounded by quartz, her paintings while cracking a laugh with her girlfriend.

“As an artist [it] is really difficult to create consistently so that we can make enough to support ourselves in this capitalistic society we live in,” said Rivera when asked about her reason to support Quintana’s fundraiser.

Rivera said it is “very fulfilling” to support a fellow artist through her craft and give back to someone who, as she described, truly appreciates. She described her career and running a small business as a “one-man show” doing graphic design, painting, and metal work.

“All the proceeds that we are making here today is going to him, I am also going to be donating 15% of the income that I made this past week to his fundraiser,” added Rivera. 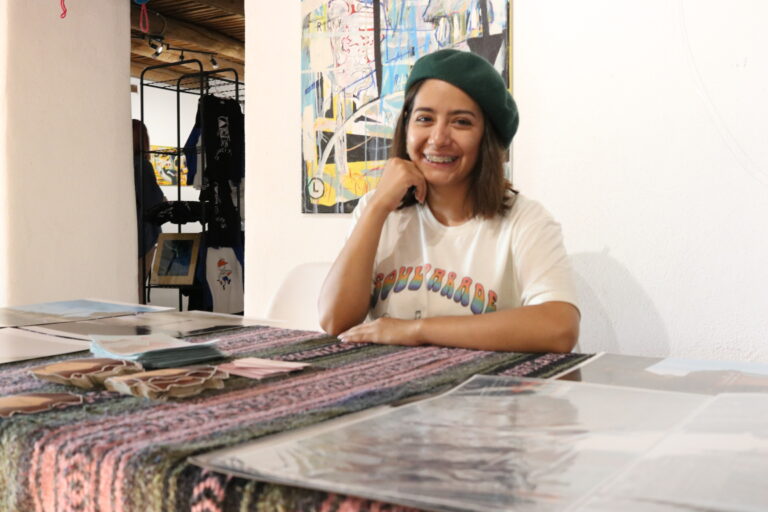 Inside of Casa Ortiz a booth had laid out several prints of photographs from the Eiffel tower and the chaotic streets of New York City.

Behind a laptop separating the prints and a beret on, local photographer Gibel Amador enthusiastically talked about her passion for film and travelling.

The young artist has combined her passion for photography and storytelling to bring to life her stories in the form of short films.

Amador said she frequently comes to Casa Ortiz art gallery and feels compelled to support other artists, and Quintana was no different.

“I feel here in El Paso we need to grow together instead of growing apart,” contended Amador.

She believes in the value of supporting local artists and their craft as well as staying local and growing as a community.

“A lot of artists [from] here, they leave and grow apart, but at the end of the day we are a big community,” said Amador. 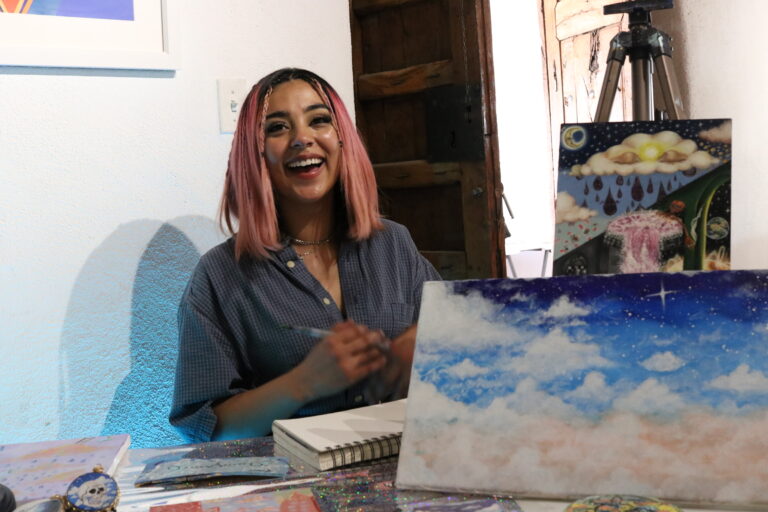 Another young artist who joined the cause was Zahndra Luna who does not know Quintana but decided to “help out in any way” she could.

Artists like her and most of the people who joined the event have multifaceted careers. Luna is a painter, fashion designer, singer and songwriter.

Luna’s booth displayed pieces made by her showing the colorful journey of her career, tote bags to stones carved with her art.

These young artists effortlessly demonstrate their love for their community, despite not knowing one another they keep showing up to help each other. As artists they recognize the beauty, yet the adversities that come as an independent artist.

Anyone interested in donating to Quintana’s cancer treatment can visit this link.