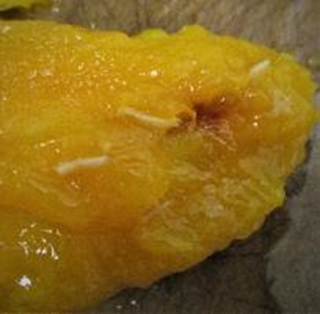 U.S. Customs and Border Protection (CBP) agriculture specialists routinely find travelers attempting to import mangos from Mexico, as the fruit is prohibited for importation because it is a common host for pests.

The need for the ban was made evident on June 26 when a traveler from California arrived at the Paso Del Norte international crossing in El Paso.

“During a subsequent inspection 12 live fruit fly larvae were found inside the mangos,” CBP officials added. “Because the man declared the fruit he was allowed to proceed without penalty and the seized items were destroyed.”

“This man was traveling to California and could have introduced fruit flies to the state had the CBP agriculture specialist not located the harmful pests,” said CBP El Paso Director of Field Operations Hector Mancha. “The impact on California’s agriculture industry could have been devastating.”

A few days later, CBP officials say that another driver did not follow the rules.

On June 28 when another California plated vehicle arrived from Mexico at the Bridge of the Americas international crossing. According to officials, the driver of the car did not declare anything to CBP personnel.

“During a subsequent inspection CBP agriculture canine Keela alerted to the contents of the vehicle,” officials added. “An exam revealed 3.5 pounds of fresh sliced mangos in a cooler.”

The driver was fined $175 and the seized items were inspected for pests and destroyed.

Travelers are encouraged to declare all agriculture items to CBP upon entry to avoid penalties and protect the U.S. agriculture industry.

For more information about the CBP bans, click here.  For previous stories on the CBP, click here.