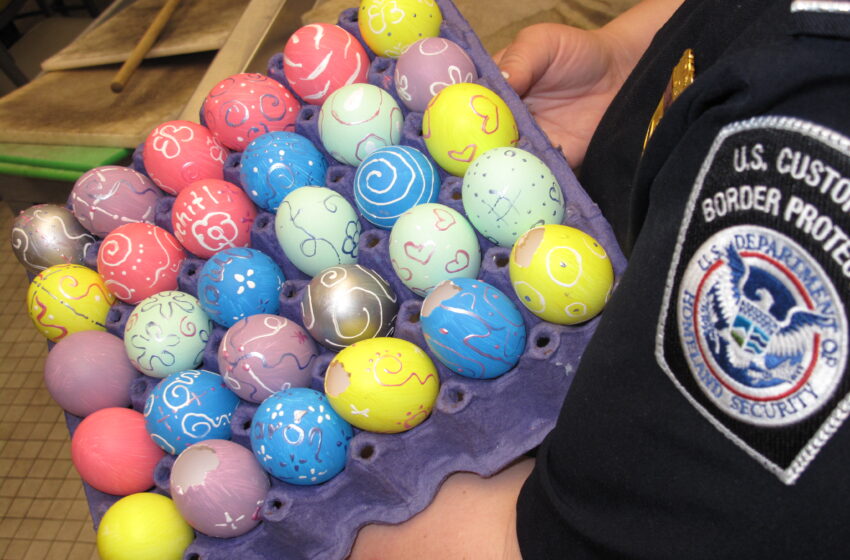 With the Easter festivities right around the corner, CBP is reminding the traveling public that cascarones – confetti-filled eggshells – are restricted to quantities of 12 per passenger and the shells may be decorated, etched, or painted but they must be clean, dry, and free of any egg residue.

“Even with the ongoing travel restrictions we expect large numbers of U.S. citizens and Legal Permanent Residents to cross the border in the days ahead. It is important to remind them about what is allowed and what is prohibited from bringing into the United States,” said Hector Mancha, CBP El Paso Director of Field Operations.

Cascarones are a restricted commodity by CBP in order to prevent further spread of Newcastle Disease and Highly Pathogenic Avian Influenza (HPAI) through contaminated eggshells.

Newcastle Disease is a highly contagious, fatal viral disease that affects a substantial number of bird species, attacking respiratory, nervous and digestive systems. Mortality is up to 90 percent of exposed birds. HPAI is also a viral disease that can cause exceptionally high mortality.

CBP officials also stressed that that fresh eggs, raw chicken, and live birds or poultry continue to be prohibited from Mexico as Mexico is affected with Newcastle Disease and Highly Pathogenic Avian Influenza (HPAI).

“Attempting to bring in these or other prohibited agricultural items would lead to traveler delays and may result in a fine ranging from $300 to $1000,” CBP officials added.

Travelers should expect longer than normal crossing times at the area ports as the holiday approaches. Travelers should plan accordingly and build into extra time into their trip.

Travlers and commuters can monitor Border Wait Times via this link or download the BWT app on their smartphone via Apple App Store and Google Play so that they can observe the wait times and make an informed decision on which bridge to use. These wait times are updated hourly.

Travelers can also view current traffic conditions at the Paso Del Norte, Stanton and Ysleta bridges on the city of El Paso website.

For more information regarding CBP’s agriculture mission, click on the following link.