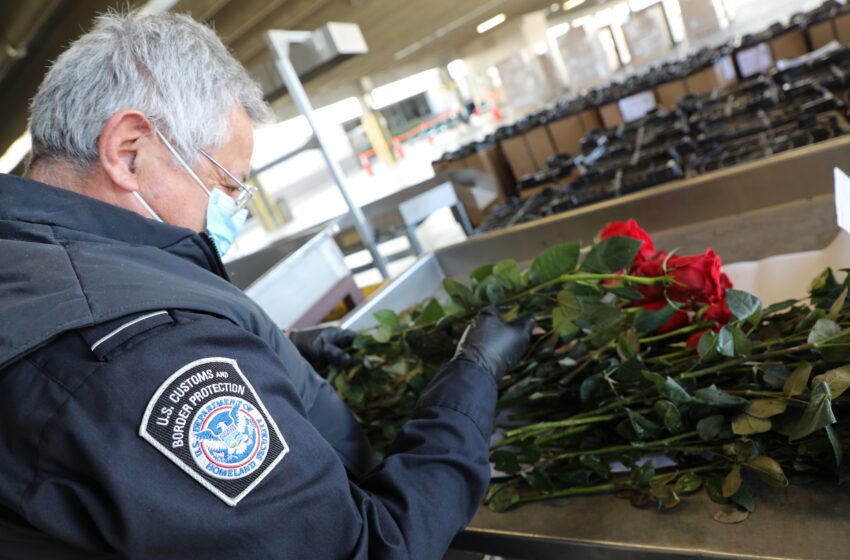 U.S. Customs and Border Protection (CBP) agriculture specialists working at El Paso area ports of entry are busy this week tapping and shaking cut flower shipments to make sure that personal and commercial importations of Valentine’s Day flowers are free from insects, pests and diseases that could harm the agricultural and floral industries of the United States. Valentine’s Day is Monday February 14.

“The first two weeks of February are one of the busiest periods of the year for CBP agriculture specialists, especially as it relates to floral imports. This includes commercial shipments arriving at area ports of entry as well as individual bouquets and arrangements being transported by individuals,” said Hector Mancha, CBP Director of Field Operations in El Paso. “Our ever-vigilant CBP agriculture specialists are carefully inspecting all floral shipments to be certain that they are free from insects, pests or disease. The public can help by declaring all floral items they are importing.”

CBP strongly encourages the public to consult the CBP website before they import floral arrangements so they know which flowers are permissible and which are prohibited or restricted.

CBP suggests those who plan to import flowers and plants from Mexico to advise their florist that the arrangements are destined for U.S. delivery.  Some flowers and plant materials commonly found in floral arrangements at southwest border ports of entry are prohibited. Those include chrysanthemums and choisya ternata (a floral filler) due to pest risk.

While a relatively small number of harmful pests are found among the millions of stems inspected by CBP, a single dangerous pest could cause millions of dollars of damage to our nation’s crops. CBP recommends that people who wish to import flowers, plant materials, and other agricultural items consult the CBP Info Center section on the CBP website before they travel or call (877) 227-5511.

Travelers should also declare all items acquired abroad to CBP officers to avoid civil or criminal penalties and reduce the risk of introducing pest and disease to the United States.  CBP now offers the CBP One mobile app, which allows travelers to request a variety of CBP services, including inspection of agricultural products. The CBP One app can be downloaded for free from the Apple App Store or Google Play.

Traditionally, Valentine’s Day, Mother’s Day, and the Easter holiday weekend are the busiest times of the year for CBP agriculture specialists. CBP agriculture specialists are the last line in the fight against the introduction of insects, pests and diseases into the United States. In January 2022 alone, they inspected more than 382,000 shipments of cut flowers from Europe, Africa and South America, intercepting 628 significant pests of varying species.