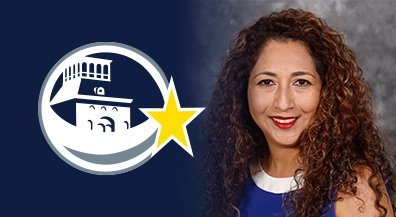 The state honor came after she was selected from among seven other teachers, each representing a different part of Texas.

“I was humbled to be selected among so many amazing teachers. There were some teachers that had 20 and 25 years of experience, so for them to choose me, who is going on my seventh year of teaching, I felt really humbled,” Manriquez said.

Each finalist had to answer a series of questions regarding their teaching methodologies and accomplishments as teachers. Manriquez was happy to share the award with her fellow CCTE teachers, which she says are instrumental to her own teaching.

“I don’t feel like I would’ve gotten where I am if I didn’t have the support of my colleagues here and our administration,” Manriquez said. “We all work as a team here. This award belongs to all of us.”

She is especially thankful to assistant principal Charlton Archard, who is always open to new ideas about expanding the EMT program at CCTE.

“He is so supportive of us, and I am very grateful to be working with him,” she said. “These kids become all of our kids, and that’s a very special thing.”

“I was already pumped about nationals, so this just added to that excitement and all the ideas of what we can do this year,” Manriquez said. “I want to start an EKG program for the students, so they can have an extra certification and work with our law enforcement department to get them trained as dispatchers as well.”

Her excitement is contagious – something senior Cindy Oliveros can attest to.

She is looking forward to starting class after taking Medical Law and Ethics, as well as Medical Terminology with Manriquez. Oliveros was overjoyed when she found out her teacher had won the award.

“I think this award is very well-deserved because she is very dedicated and knows how to inspire her students,” Oliveros said. “She’s always open to opinions and ideas. She’s very supportive.”