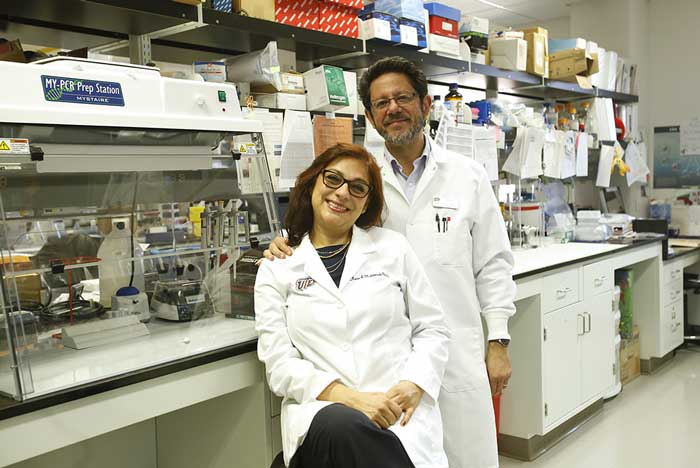 The “kissing bug” – the nickname for the insect responsible for spreading Chagas disease – certainly does not look like Cupid, but some might say it is symbolic of the chubby, winged cherub for one UTEP couple.

Rosa Maldonado, D.Sc., and Igor Almeida, D.Sc., are among the world’s leading Chagas disease experts and, combined, have been researching the global illness for more than 50 years. The University of Texas at El Paso professors reached a major milestone before the summer of 2017 when they moved one step closer to developing the first-ever clinical Chagas disease vaccine. The pair was granted a patent for their vaccine candidate.

The preventive vaccine had been in development since 2008 and in 2017 was tested at the Texas Biomedical Research Institute (TBRI) in San Antonio on nonhuman primates in collaboration with John VandeBerg, Ph.D. Results are promising and may lead to clinical trials in the coming years.

A second vaccine, based on synthetic parasite sugars, in collaboration with Katja Michael, Ph.D., associate professor in UTEP’s Department of Chemistry, also was tested in nonhuman primates at TBRI and yielded very promising results. Almeida started work on that vaccine 27 years ago and is currently awaiting patent approval. The vaccine studies were funded by the Robert J. Kleberg, Jr. and Helen C. Kleberg Foundation and the National Institutes of Health.

“The big problem with Chagas disease is heart failure,” Maldonado explained. “We have determined [that] the inflammation in the heart and the parasitic load significantly decreased, and this vaccine is protecting the animals from the disease. These are the first synthetic [Chagas] vaccines tested in a nonhuman primate model ever.”

The UTEP scientists said that between 6 million and 8 million people are chronically infected with the potentially life-threatening Chagas disease. The sickness is caused by the parasite Trypanosoma cruzi, which is transmitted to animals and people by insect vectors known as kissing bugs, as well as by contaminated blood, organs, foods and juices, and congenitally (mother to baby). The disease has been endemic to Latin America, but is rapidly spreading through the U.S., Europe, and other regions as a result of globalization. There is no clinical vaccine, although there have been several experimental efforts throughout the years.

“There is genuine excitement in the field for the discoveries Dr. Almeida and Dr. Maldonado have made along with their teams of student researchers,” said Robert Kirken, Ph.D., dean of the College of Science. “They have made significant contributions to the advancement of combating Chagas disease. UTEP is on the cusp of finding a vaccine that could potentially help millions of people.”

While Maldonado and Almeida make undeniably effective research partners, they are also partners in life. Through a common friend from Venezuela, where Maldonado was born, they met at the annual meeting on Chagas in 1991 in Brazil, Almeida’s home country. A year later they reunited at the same conference and have been together ever since.

“I think we complement each other in many aspects,” Almeida said. “Although we have similar backgrounds, I have been more focused in structure and function of sugars and lipids of parasites since my doctoral studies, while Rosa has been more dedicated to development of new chemotherapeutic approaches against parasitic diseases and molecular biology of parasites.”

Married now for almost 23 years, the first of which were many times spent away from each other due to research projects in separate parts of the world, the trailblazers in the fight against Chagas disease were brought together by the very disease they are studying.

A career in science was never a question for Maldonado.

“I always liked science since I was little,” she recalled. “I used to watch programs like heart transplants on TV and I used to collect red ants and black ants with my brother.”

Painful chapters in her life, the deaths of her cousin, godfather, grandfather and her beloved “Grandma Lita” as a result of health problems inspired her to focus her studies on improving human health.

“I think that all those losses contributed to my interest in science,” Maldonado said.

The researcher has found great success in her studies of kissing bugs and Chagas disease, publishing some of the first papers on the topic. She is recognized as a global expert in the subject matter and travels the world sharing her expertise.

Almeida is part of an elite global group of researchers elected in 2017 as Fellows of the American Academy of Microbiology, which includes several Nobel Laureates and members of the National Academy of Sciences. Fellows were selected based on their records of scientific achievement and original contributions that have advanced microbiology.

Though he never had any direct influence from his family, Almeida says his interest in science came at a young age from curiosity.

“When I was an adolescent, perhaps 12-14 years of age, back in Brazil, I started collecting a bi-weekly magazine called The Scientists,” he recalled. “Each issue would come with an article about the life of a famous scientist in the fields of biology, chemistry or physics, and included a kit for conducting at home some basic experiments related to those scientists’ discoveries. I think it was then that I realized I wanted to be a scientist.”

Job openings brought the two experts to the borderland in 2004.

In addition to their work with Chagas disease, Maldonado and Almeida also have recently helped make strides in the fight against cutaneous leishmaniasis with an effective human vaccine. The tropical disease also is found in Texas and Oklahoma, and has affected U.S. troops stationed in Afghanistan and Iraq.

Eva Iniguez, Ph.D., who was a doctoral student at the time, and the UTEP team’s collaborators in Liverpool, England, (Alvaro Acosta-Serrano, Ph.D.) and Saudi Arabia (Waleed Al-Salem, Ph.D.), recently published their research findings in PLOS Neglected Tropical Diseases, the first journal solely devoted to the world’s most neglected tropical diseases.

Leishmaniasis is caused by the protozoan Leishmania parasites, which are transmitted by the bite of infected female phlebotomine sandflies – flies that are three times smaller than a mosquito. According to the World Health Organization, there are an estimated 700,000 to 1 million new cases annually, and they cause 20,000 to 30,000 deaths each year. The disease affects some of the poorest people on Earth. Though it is found in more than 90 countries in the tropics, subtropics and southern Europe, naturally transmitted cases also have been found in the northeastern parts of Texas and in Oklahoma. The disease has impacted at least 2,000 U.S. troops stationed in Afghanistan and Iraq.

“I think we are in a very good position with this vaccine candidate,” Maldonado said. “I think it is very promising. If things go well, I think we will be able to introduce this vaccine for clinical use in the future.”

During the team’s more than four years of research at UTEP’s Border Biomedical Research Center, they discovered a vaccine formulation for cutaneous leishmaniasis that resulted in a 96 percent decrease in the lesions caused by the illness and showed an 86 percent protection rate from the disease in mice. The team once again counted on the expertise of UTEP chemist Katja Michael, Ph.D. Her research group has been synthesizing the molecules, known as antigens, used in this study and several others.

“The advances the team has made against cutaneous leishmaniasis have gained global attention,” Kirken said. “Drs. Almeida and Maldonado are again helping pave the way against deadly tropical diseases outside the lab. In addition, they are molding future scientists in the field to make an extended impact inside the lab.”

Almeida and Maldonado’s passion for what they do is evident through their publications, patents and presentations. Their fondness for each other is obvious when they are in the same room. They finish each other’s sentences and kindly care for each other.

“I think the secret is mutual respect,” Almeida said. “First and above all, we respect each other as professional individuals. I have always been very concerned about her professional happiness and fulfillment. Thus, I have aligned my professional interests and goals with hers. I have never thought about and made plans for my career, but rather our careers.”

You’ll never experience Almeida introducing Maldonado as his wife, though. She is first Dr. Maldonado, then his spouse.

“We have always tried to separate our roles,” Maldonado said. “He has always given me my place so I’m not in his shadow.”

Their labs are also separate, a decision Almeida described as “another important secret for keeping our personal and scientific marriage alive and well for almost 25 years.”

“We have extensively collaborated on several projects, but we have our own space and students,” he said.

The pair travels many weeks out of the year and spends a lot of time conducting research in the lab, but they each take time to unwind and recharge. Maldonado enjoys great food and a day of pampering, while Almeida loves soccer, classical music, reading, and also great food.

They’ve made El Paso and The University of Texas at El Paso their home, Maldonado even bringing her mom from Venezuela to have her close by, and find satisfaction in the difference they are making on and off campus.

“I feel great pleasure and satisfaction witnessing the growth and success of the students I have the opportunity to teach,” Maldonado said.

Almeida added: “We always tell our students, ‘You can do anything and be anyone; most of the time it just depends on you and your efforts. Always follow your dream and your heart, and always believe in yourself.’”

For Almeida and Maldonado, their dreams and their hearts led them to the same place: each other.