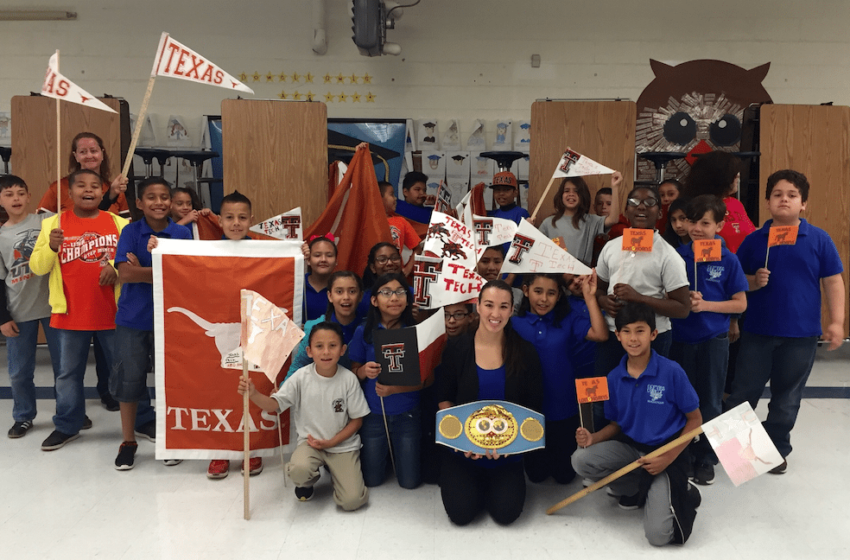 “I hope I can inspire them to be the best of whatever they chose to be in the future,” Han said. “I hope they remember what I say, and it carries with them when they go to middle school, high school and college.”

Han visited Dowell as part of their Monday Meetings series, where different guests come and speak to students about what it takes to be successful in life.

“I hope I can inspire them to be the best of whatever they chose to be in the future,” Han said. “I hope they remember what I say, and it carries with them when they go to middle school, high school and college.”

Han, who defended her International Boxing Federation (IBF) featherweight title last month, started training when she was five-years-old so she spoke to the students about overcoming her fears as a young martial artist to get where she is today.

“I was scared to train. I didn’t have any confidence, but I didn’t give up,” Han said. “You have been blessed with amazing teachers and an amazing principal who will help you set goals to achieve. I encourage you to never give up until you reach those goals.”

Han is an EPISD graduate, having attended several schools in Northeast El Paso –something she is proud of. Her younger twin sisters are even former Dowell Owls.

“I’ve always lived in the Northeast and represented the Northeast,” Han said. “I want the kids to know I come from EPISD, and they will be inspired that no matter where they come from they can do it as well.”

Han also talked about the importance of obtaining a higher education. She earned her degrees in kinesiology and business from the University of Texas at El Paso.

Fourth grade student Angela Rivas was really uplifted by what Han had to say, and even recognized her from the news.

“I watched her on ABC-7 when she was talking about her fight. I think she’s a really good boxer,” Angela said. “It was very inspirational. It was very helpful for us because we are at the stage where we are figuring out what we are doing with our lives.”

Angela wants to be a scientist when she grows up and is a self-proclaimed nerd. Listening to Han talk about all the obstacles she had to overcome gives her hope for achieving her goals.

“I’m proud she’s a woman, and that she’s fighting,” Angela said. “I hope she can visit our school again.”
¬
Dowell Elementary welcomes different guests for their monthly Monday meetings to help inspire the students to succeed.

“Hearing her is extremely motivating for the kids,” principal Yeni Ontiveros said. “Her message is important because it helps the students set goals and attend college by keeping them motivated to do whatever it takes to achieve those goals.”