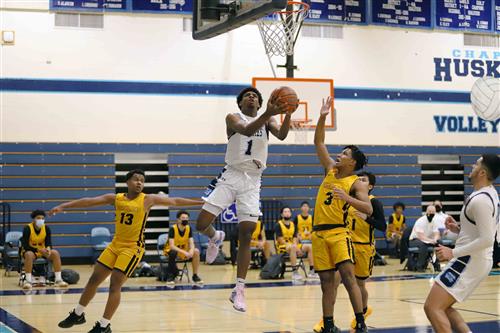 Chapin’s basketball phenom K.J. Lewis cracked ESPN’s top 25 list for the Class of 2023 this week, coming in at No. 21. It’s no surprise that the sophomore shooting guard is already being heavily recruited by top colleges.

“It’s a blessing knowing here are thousands of kids in the United States competing and how my hard work is being recognized,” said the 6’4, 205-pound sophomore. “Basketball has taught me that you have to work hard in anything you do and to have a never give up attitude in life.”

So far, the five-star recruit been offered scholarships by seven Division I programs, including the University of Texas at El Paso, Perdue, Texas A&M, DePaul, Houston, Texas Christian University and Arizona State.

“I think he is the first El Paso high school athlete to garner this type of national attention while still in high school,” said coach Rodney Lewis, no relation. “We have had a lot of great athletes to come out of our city, but KJ may end up being the most highly recruited and nationally spotlighted of them all.”

K.J. who averages 23 points, five rebounds, three assists and two blocks a game for the 19th state- ranked Husky’s is focused on his current season.

“My team goals are to go further in the playoffs than last year and grow as a team,” he said.

K.J. doesn’t know who he’ll ultimately sign with, but for now, he’s staying grounded and steady with his academics – knowing that when he does make it to college, he plans to study criminal justice.

“My ultimate goal is to be an NBA player,” KJ said. “I have no other choice but to keep my grades up because my mom is strict when it comes to my education because basketball will eventually stop.”

Mom Monica Ramirez, a former UTEP basketball player and assistant coach for the Miners, inspired his hoops obsession when he was just 3 years-old.

“My mom is the biggest reason I play,” he said. “She taught me the rights and wrongs of the game that I fell in love with. She’s my biggest fan and my biggest critic in one. There’s never a dull moment in our relationship. I just want to pay her back for all the sacrifices she’s made for me and my sister.”

His other basketball idols: Kevin Durant and LeBron James.

Like LeBron, KJ knows the importance of giving back and making an impact on the community. He enjoyed reading to kids during pre-pandemic days at the feeder elementary schools.

“I love helping kids younger than me and trying to make their day and be someone they can look up to,” he said. “Because when I was little, I remember the older kids I looked up to. It’s important because I want to always try to give someone hope and tell them to chase their dreams because dreams do come true.”