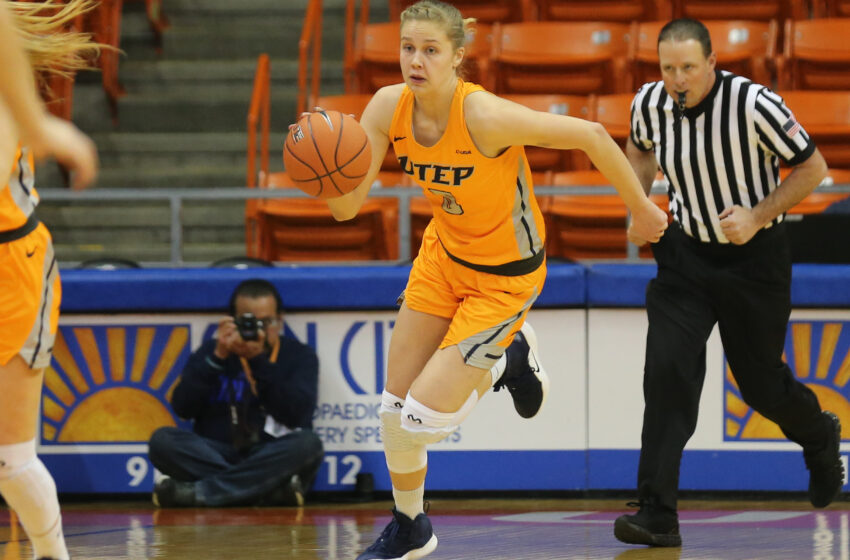 “I’ve never been in a situation like this where we had six players and I couldn’t be prouder of them,” UTEP head coach Kevin Baker said. “We battled the whole way, we didn’t quit. We play college athletics for a reason. It teaches these young kids to be resilient in times of adversity, and we’ve had plenty of that. They continue to fight and play good basketball. The ball doesn’t always go in for us like we want it but at the same time I liked the way we played in spots today. The biggest thing for us as everyone knows is we have to get healthy, and hopefully we can do that soon.”

UTEP continued to get after it over the final 20 minutes, peeling off nine straight points midway through the fourth quarter, but couldn’t get back into it fully as Charlotte improved to 10-1 on the season at Halton Arena.

UTEP won the rebounding battle (31-29), thanks in part to Puc’s game-high nine boards, but it was hurt by shooting 30.6 percent (15-49) from the floor while also committing 25 turnovers. The 49ers took advantage by converting those giveaways into 31 points, while also connecting on 50.0 percent (25-50) from the floor. Included among that was finishing 12-21 (57.1 percent) from distance.

Charlotte also flexed its muscle with its depth, playing 12 different individuals in the contest. It was a different story for the Orange and Blue, who only had six healthy players available. Each Miner logged at least 25 minutes in the game, with Zec playing the entire tilt. Puc (38 minutes) and Rochelle (24 minutes) matched their career highs while Neidy Ocuane (37 minutes) had a personal best.

Charlotte was paced by 17 points from Mariah Linney, who did most of her work from distance by going 5-6 on triples. She was joined in double figures for scoring by Octavia Jett-Wilson (12).

UTEP got off to an early 4-2 lead on baskets from Zec and Puc before a 6-0 run from the 49ers vaulted them ahead by four. Zec ended the sequence with a triple to cut the deficit to one (8-7), but as it turned out that is as close as the Miners would get. Charlotte scored the final eight points of the fame to lead by nine (16-7) through 10 minutes of action.

The push continued in the second stanza, with the 49ers capping off the aforementioned 17-2 run to take a 16-point lead (25-9) with 5:31 to play in the quarter. UTEP was basically even the remainder of the half, as it trailed by 17 (34-17) going into the locker room.

Charlotte eventually extended its advantage to as many as 28 (57-29) with 6:11 remaining in regulation. Rather than just fold up shop, the Orange and Blue stuck back with nine consecutive points. Alexander started it with an and-one, which was followed by triples from Puc and Ocuane. Charlotte regrouped before UTEP could get any closer.

UTEP returns to the Don Haskins Center to play host to Marshall at 7 p.m. MT on Jan. 31. The contest opens up a stretch of the Miners playing six of nine at home to close out the regular season. It will be the “Hoops for Troops” promotion game, with active members of the military able to buy tickets for $2 with their military ID.