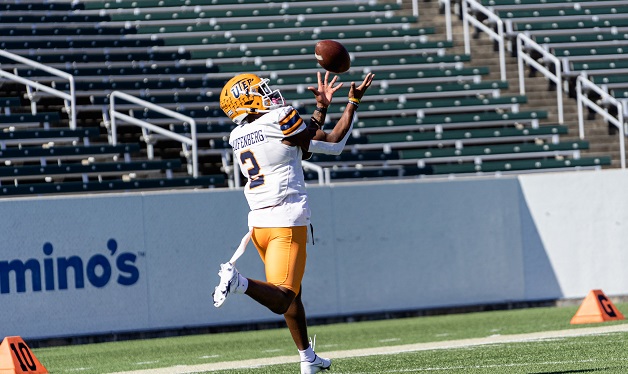 CHARLOTTE  – UTEP battled Charlotte on even terms for the first 30 minutes, but the 49ers took command with 17 unanswered points in the second half and dealt the Miners a 38-28 setback on Saturday afternoon at Jerry Richardson Stadium.

The UTEP defense was solid once again, holding Charlotte to 329 yards.  But Charlotte scored 14 points off three UTEP turnovers early, then wore down the Miner stop troops late with two fourth-quarter touchdowns.  After UTEP dominated the time of possession line in the first half (19:11 to 10:49), the 49ers turned the tables in the second half, eating 18:09 off the clock to the Miners’ 11:51.

Chris Reynolds completed 14-of-23 passes for 185 yards and two touchdowns for the 49ers with some timely throws, as Charlotte converted 8-of-13 third down attempts.

Gavin Hardison was 19-for-35 passing for 204 yards for the Miners, with two touchdowns and two interceptions.  UTEP coughed up the football three times, while Charlotte did not have a turnover.

After Charlotte took an early 7-0 lead, the Miners scored the game’s next 14 points.  Deion Hankins scored his sixth rushing TD of the season with 3:29 remaining in the first quarter, capping a drive that ate 8:51 off the clock.  Late in the second quarter, Ronald Awatt picked up his third rushing score in four games, ending a 98-yard scoring drive – UTEP’s longest in five years.

The 49ers tied it up shortly before halftime on a 22-yard TD pass from Reynolds to Victor Tucker.

Charlotte converted a UTEP turnover into seven points for the second time when Reynolds found Cameron Dollar for a 10-yard passing TD with 3:31 remaining in the third quarter.  Dollar had 86 yards on six catches.

Hankins picked up his third 100-yard game of the season with 18 carries for 119 yards.

UTEP returns to the Sun Bowl for the first time in six weeks next Saturday (Oct. 31) to battle North Texas in the C-USA home opener at noon MT.  The game will be nationally televised on CBS Sports Network.

For complete coverage of UTEP Football, follow the Miners on social media at @UTEPFB (Twitter/Instagram) or visit the official home of UTEP Athletics.​