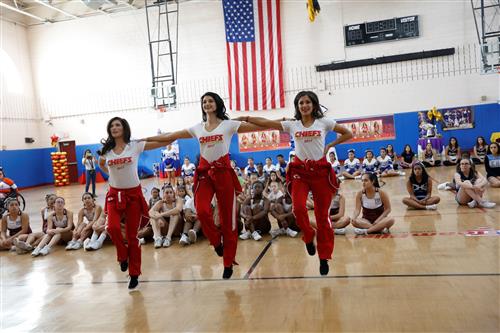 There’s little doubt that El Paso is Dallas Cowboys Country. And even though the blue star reigns supreme among El Paso students and parents, hundreds of students from throughout the El Paso Independent School District and other area schools made their way to Fort Bliss this weekend for a chance to meet and learn some dance moves from the Kansas City Chiefs Cheerleaders.

Cheer teams from Bowie, Andress, Chapin, Burges as well as other middle and elementary schools were at hand to get proper NFL cheer training from the pros. The students learned touchdown line dances and even the Tomahawk chop – a trademark Chiefs move.

“This is a great way to build that bridge between the military community and the civilian community,” says Deborah Trexler, Director for Youth Education Support Services at Fort Bliss.

Chiefs cheerleaders Katrina, Emma and Kayla, who per team rules are not allowed to provide their last names, lead the cheer clinic and also took time to thank the military families and service men and women who were in attendance.

“I can definitely learn from their energy,” Lucas said. “They gave it their all without getting rid of their smiles.”

Having big names in cheer teach local squads is not a regular occurrence, and these girls know it. NFL cheerleaders are considered to be the pinnacle of the sport.

Bowie High School’s cheer captain Lluvia Rodriguez said cheer squads normally have to spend thousands of dollars to travel to out-of-town trainings to get the type of insight the squads received on Saturday.

“It’s amazing to have NFL cheerleaders come to El Paso and teach us what they know,” she said.

Chiefs Cheer Captain Katrina said the camp allows her teammates to leave a legacy of hard work among the young students that were there to learn from them.

“We hope that we inspired them and that we taught them about work ethic and teamwork,” said the five-year veteran of the squad. “As spirit leaders, they get to be part of the camaraderie and set the tone for their schools.”