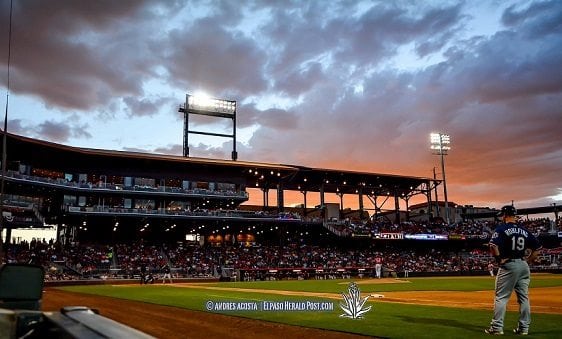 Also on the docket is the return of the popular Fleece Blanket honoring the Chihuahuas Fifth Season Celebration on June 18th. Other giveaways include three dog giveaways on each of the three Bark at the Park games presented by GECU (April 29th; July 22th; and August 19th), a Fanny Pack in celebration of 80s Night on June 13th and more soon to-be-announced giveaways!

Guests will get to experience fun with theme nights such as One Hit Wonders Night (May 19th), Star Wars Night (July 14th) and Harry Potter Night (September 1st).

A new addition to the promotions calendar is a 25% savings for military, first responders, and veterans. The special rate is available on Monday through Thursday games (excludes March 26, April 10th, July 2nd, and July 3rd) via GovX.com or in person with valid ID at either of the Southwest University Park box office locations.

On Military Mondays presented by Prudential all active military and veterans will get to enjoy one complimentary Jumbo Hot Dog Meal with valid military ID.

New to the Days of the Week promotional lineup is the Tacos Tues & Brews special! For the first two and a half hours after gates open, tacos and 12oz Estrella are $2 each, every Tuesday home game (excluding July 3rd).

Guests with paid admission must be present to receive a giveaway and only one giveaway per person will be allowed based on availability. All promotions, themes, and dates are subject to change.

See below for a complete list of promotions and giveaways.

Individual game tickets for the 2018 regular season, as well as the Padres vs. Chihuahuas Exhibition Game on March 26th, will go on sale to the general public on Saturday, February 24th from 10 a.m. to 5 p.m. at the Durango Box Office at Southwest University Park. Online sales begin at 12:01 a.m. on Sunday, February 25th.

For information on the 2018 Padres vs. Chihuahuas Exhibition Game and the latest Chihuahuas news and information, visit epchihuahuas.com.

Days of the Week Promotions Breakdown:

12      Thank You Thursdays presented by Prudential and Thrifty Thursdays

May 2 – Baseball in Education Day

May 10 – The Hospitals of Providence Nurse Appreciation Night

May 17 – Thrifty Thursday & Thank You Thursday presented by Prudential

May 19 – One Hit Wonders Night

May 30 – The Hospitals of Providence Cancer Awareness Night

**All games, themes and promotions are subject to change.**