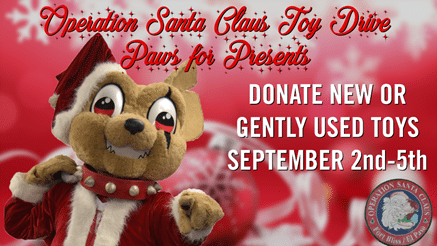 The Chihuahuas and Operation Santa Claus are teaming up to begin the season of giving a little earlier this year at Southwest University Park. Fans are asked to bring new or gently used toys to Chihuahuas games from Friday, September 2nd through Monday, September 5th. The toys will benefit children this holiday season that otherwise may not receive gifts.

Operation Santa Claus originated back in 1957, helping thousands of families in its 60 years of existence. The two organizations teamed up during the 2015 holiday season and provided over 1,000 toys to children.

The Chihuahuas will face the Albuquerque Isotopes (Colorado Rockies) for the final series of the 2016 season. The Chihuahuas (72-65) have a 5.5 game lead over the Isotopes and look to clinch the Pacific Coast League Pacific Southern Division series against their regional rival.

The Chihuahuas magic number is now two! Any combination of Albuquerque losses and/or Chihuahuas wins equaling two the remainder of the season guarantees a division title for El Paso.

The Chihuahuas have plenty in store for their fans over the final series including, Hockey Night, the final two Fireworks Spectacular shows of the season on Saturday and Sunday, respectively, and a mid-day matinee on Labor Day with first pitch slated for 1 p.m.

The Chihuahuas encourage fans to purchase in advance as seating is limited and going fast! Visitepchihuahuas.com or call (915) 533-BASE for more information.