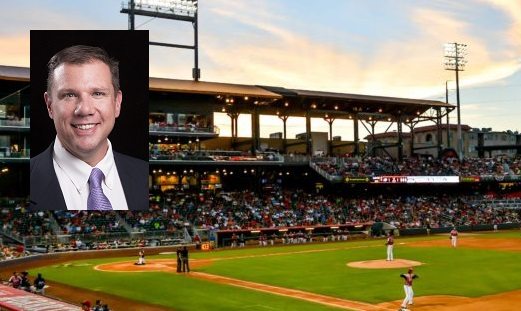 The El Paso Chihuahuas’ Brad Taylor has been promoted to Vice President of MountainStar Sports Group and the Chihuahuas.

Taylor, who has been with the Chihuahuas since May 2013, will continue to serve as general manager and oversee the team’s ticket sales, corporate partnership sales, guest services, community programs, operations, marketing and merchandising.

“Throughout his tenure, Brad has done an outstanding job overseeing our day-to-day business and has been a critical part of the success of Southwest University Park and the Chihuahuas,” said MountainStar Sports Group President Alan Ledford. “He is an integral part of this community and does a fantastic job representing our organization. This promotion is reflective of Brad’s dedication, leadership, and the outstanding job he has done during his tenure. We’re in the business of creating fun, memorable experiences for our fans, and Brad is extraordinary at making this organizational aspiration a reality.”

Since his arrival in the Sun City, Taylor has witnessed the groundbreaking of Southwest University Park, helped oversee the construction of the ballpark, and led the charge as the Chihuahuas successfully launched their brand on October 22, 2013.

Under Taylor’s guidance, the Chihuahuas have become the top selling brand in Minor League Baseball (MiLB), a feat that includes the top social media ranking (more than 220K followers across Facebook, Instagram, Twitter, Snapchat, LinkedIn & YouTube) out of 160 teams.

During the 2014 inaugural campaign, the Chihuahuas garnered national attention for their logo, merchandise, promotions and attendance. The Chihuahuas’ Bark at the Park Promotion was named MiLB’s Promotion of the Year (the second time in Taylor’s career; Bowling Green Hot Rods, 2009) and raised more than $20,000 for local animal groups.

More than 548,000 fans attended Chihuahuas games, totaling 48 of 67 home game sellouts (72%) while averaging over 8,100 fans per game at Southwest University Park. Southwest University Park was also named the 2014 Ballpark of the Year by Ballpark Digest and Baseballparks.com. With the success of the Chihuahuas inaugural season, Taylor was named a Pacific Coast League Executive of the Year finalist.

The Chihuahuas continued to flourish in year two. On August 1st, and in under two years, the Chihuahuas welcomed their 1–millionth guest through the Southwest University Park gates and finished the season tallying over 575,000 fans in attendance.

Success rolled into 2016 as the Chihuahuas registered more than 560,000 guests, sold out 70% of their games for the third consecutive year, and were the recipient of the Esurance Home Field Advantage Award for attendance.

“The success of the Chihuahuas brand is largely attributable to Brad’s passion and focus to ensure we live and breathe all that it represents each day,” Ledford said. “His passion for the Chihuahuas rubs off on everyone he comes in contact with, from our staff to the hundreds of thousands of Chihuahuas fans who visit Southwest University Park each year.”

Like MountainStar Sports Group, Taylor’s vision of the El Paso Chihuahuas is not just baseball, but to also produce a team that is a community-based organization. The team launched the Chihuahuas Volunteer Pack in 2015, an El Paso-wide volunteer force created to give back to the region.

Taylor led the charge in securing Helen of Troy, manufacturer of popular brands such as Vidal Sassoon, Revlon and Dr. Scholl’s to name a few, as a presenting partner. The Pack grew to more than 300 members since its April 2015 debut and has contributed more than 1,000 hours to community initiatives. The mascot program also garnered attention with more than 500 appearances in back-to-back years (2015 and 2016) that include engaging in educational curriculums around the community.

“On behalf of our ownership group, I want to thank and recognize Brad for all he’s done to make our vision for this organization become a reality,” said MountainStar Sports Group Co-Owner and CEO, Josh Hunt. “His leadership has been incredibly important as we work to continue to improve the quality of life in our region. This promotion is well deserved and we’re proud he’s part of our organization.”

Taylor has been instrumental in Southwest University Park’s success as one of El Paso’s premier venues. Since its opening, the ballpark has been home to two professional international soccer matches, IBF Featherweight Boxing, the annual El Paso Marathon, the 2015 Gildan Triple-A Baseball National Championship game, Way Out West Country Music Festival and the most recent announcement of the 2019 Triple-A Baseball All-Star game. The ballpark has also been a venue for business conferences and expos, 5K community races, and company galas, to name a few.

Before coming to El Paso, Taylor was the President of the Bowling Green Hot Rods, where he was charged with the development of a new stadium, corporate partnerships, customer relations, and community engagement efforts.

Taylor was responsible for hiring the original Hot Rods front office staff and was instrumental in the development of the Hot Rods logo and brand which has been in the top 25 of minor league baseball.

Prior to his stint in Bowling Green, Taylor spent nine seasons (2000-2008) working for one of the most successful teams in Minor League Baseball, the Trenton Thunder, the Double-A affiliate to the New York Yankees. As general manager (2006-2008), the Thunder became the only team at the Double-A level or below to draw more than 400,000 fans per year for 14 consecutive seasons.

While in Trenton, Taylor spearheaded the effort to create a new logo for the Thunder which is still used today and is still a top 10 mark in Minor League Baseball.

In Taylor’s nine years with the Thunder, the club received national recognition with two awards from Minor League Baseball. Following the 2005 season, the Thunder was named the Johnson President’s Trophy Winner, recognizing the “Complete Baseball Franchise” of the 160 teams in affiliated baseball. The Thunder also won the coveted Larry MacPhail Trophy for Outstanding Club Promotion in 2003.

Prior to joining the Thunder, Taylor worked for the Cape Fear Crocs (Fayetteville, N.C.), a Single-A affiliate of the Montreal Expos, from 1996 through 1999 and was their general manager in 1998 and 1999. During the 1995 season, he made his first stop in Minor League Baseball, serving as the River City Rumblers Assistant General Manager (Huntington, WV).

Taylor received a Bachelor’s Degree in Sociology from Randolph-Macon College (Ashland, VA) in 1991, where he also played baseball for four years as a second baseman, serving as team co-captain his senior year.

Entering his 23rd season of professional baseball, Taylor is a native of Fairfax, Va. Taylor and his wife Jennifer have two sons, Braxton and Parker.