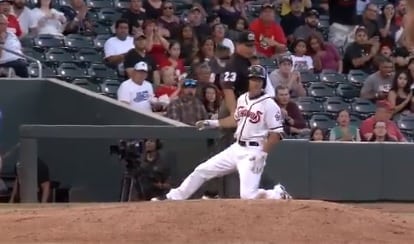 The Chihuahuas were straight up dogs against the Sacramento Saturday night, pummeling the River Cats 9-5.

The Dogs’ win kept them in first place with the Salt Lake Bees, who won against the Tacoma Rainiers 2-1 in extra innings late Saturday. The two clubs have been fighting for the top spot in the PCL Pacific Southern Division since Friday.

The Chihuahuas lineup was seeing the ball well against Cats starter Tyler Herb (6.66 ERA) who threw 76 pitches in his six innings of work. Dogs catcher Brett Nicholas (.300 BA) got things started in the first inning with a two-run home run, El Paso 2-0.

El Paso came back in the third inning and scored another two runs on a triple by center fielder Matt Szczur (.324 BA) that nearly rolled to to the wall in right center, El Paso 4-0.

Nicholas, who was especially fond of Herb on Saturday, nailed a double off of him in the fifth inning that scored Forrestt Allday (.299 BA) and Luis Urias (.278 BA), El Paso 6-0.

Nicholas was responsible for four of the six runs El Paso had scored up until the 5th inning.

El Paso starter Brett Kennedy (.253 ERA) was outstanding against the Cats lineup, that included All-Star third baseman Evan Longoria, who is on a rehab assignment for the San Francisco Giants. Kennedy threw 94 pitches in seven innings and only gave up four hits, including a solo home run in the seventh by Cats power-man Chris Shaw (.268 BA, 20 HR), El Paso 6-1.

Sacramento added another run in the eighth inning when Longoria smoked a ball to third baseman Dusty Coleman that ricocheted to left field off of his arm and scored a runner from third base, El Paso 6-2.

The Dogs – who have struggled with runners in scoring position this season – were 5-for-13 Tuesday. The team showed improvement in the eighth inning when they added three more runs on five singles off of Cats lefty Josh Osich (6.23 ERA), El Paso 9-2.

It might have ended with that score if not for a two-run home run by Cats shortstop Orlando Calixte (.279 BA) and an RBI double by center fielder Gregor Blanco (.227 BA) in the ninth inning. Those three runs were made with two outs in front of a nervous and quieted crowd of 9,452 at Southwest University Park.