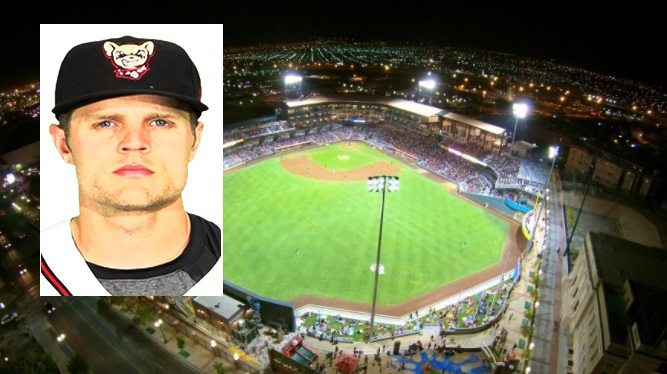 Buss is batting .380 with five home runs and 26 RBIs in 55 games played this season. The 30th annual Triple-A All-Star Game will take place in Tacoma on Wednesday, July 12.

Additionally, the Pacific Coast League released Wednesday its 30-man roster for the 30th annual Triple-A All-Star Game, which will be played at the Tacoma Rainiers’ Cheney Stadium.

The contest will be broadcast live on MLB Network beginning at 6:00 p.m. PDT. The PCL’s winningest modern-day manager, Fresno Grizzlies’ Tony DeFrancesco, will skipper the roster comprised of players from all 16 clubs. 13 players were elected to the team by balloting of the club’s field managers and general managers, members of the media and broadcasters, with the remaining 17 selected by league officials.

The youthful roster features an average age of 25 years, with 27 of the players born in 1990 or later. Five players are among Baseball America’s top 100 prospects and 12 have yet to make their Major League debuts. The Reno Aces, owner of the PCL’s best record, and Oklahoma City Dodgers each have a league-best four representatives.

Reno is slated to have three starters; outfielder Oswaldo Arcia, the overall top vote-getter, will be joined by DH Christian Walker and reliver Jimmie Sherfy. Arcia is hitting .347 and pacing the league in on-base percentage (.427), slugging percentage (.686) and OPS (1.113). Walker has also helped drive an Aces offense that has scored 48 more runs than the next best team.

The Pennsylvania native has a PCL-high78 RBI and 45 extra-base hits. Sherfy, the catalyst in the bullpen, has collected a club-best nine saves and sports an impressive 35:3 strikeout-to-walk ratio. Infield reserve Ildemaro Vargas, who has topped the league with 24 doubles and 64 runs on the year, will round out the quartet of Aces.

The Dodgers are highlighted by Wilmer Font, who will become the third pitcher in franchise history to start the Triple-A All-Star Game, following Jarred Cosart in 2013 and Aaron Myette in 2002. The righty leads Minor League Baseball with 112 strikeouts, punching out 12.55 batters-per-nine innings, while limiting opponents to a .212 batting average.

Willie Calhoun will draw the start at second base; he has collected 37 extra-base hits and totaled 157 bases this season. Alex Verdugo, the team’s leader in hits (88), has been elected as the third outfielder. The Dodgers reserve is reliever Madison Younginer.

The right-hander has held hitters to a .168 average, allowing only 7.8 baserunners-per-nine innings, both of which lead PCL non-starting pitchers.

The Iowa Cubs and Fresno Grizzlies each have multiple selections. Iowa’s Victor Caratini garnered the most votes among catchers. He will be making his third career MiLB All-Star appearance after hitting .343 through the first 68 games.

Right-hander Seth Frankoff was the second elected starter. The North Carolina native has the best WHIP (1.01) and batting average against (.204) among league hurlers. Matt Carasiti, recently acquired from the Colorado Rockies, received the most votes among relivers. The Connecticut native has 13 saves, the most in the league – and all came as a member of the Albuquerque Isotopes.

The Grizzlies Colin Moran, who leads the club with 57 RBI and is tied for the team-high with 17 home runs, will line up at third base. Astros prospect Derek Fisher received the second-most votes among outfielders and will start alongside Arcia and Verdugo. The left-handed hitter, ranked among the game’s top 100 prospects by multiple outlets, is among league leaders in slugging (.581) and total bases (155).

Garrett Cooper, representing division-leading Colorado Springs, will be one of two remaining starters. The Auburn product ranks among PCL leaders in multiple offensive categories, including a .357 average. The PCL’s starting shortstop will the Las Vegas 51s’ Amed Rosario. A consensus top 10 prospect in the game, the 21-year-old has collected 98 hits while dazzling on defense.

Their division rivals will send right-handed starters Paul Blackburn and Chris Smith, who are second and fourth in the league in ERA, respectively, along with the PCL’s home run leader, Renato Nunez.

The PCL will look to snap a four-game All-Star Game skid. They dropped a 4-2 decision last year to the International League in Charlotte. The IL has taken 11 of the past 14 games and has gone 12-7 in the 19 years since the event changed to the current IL vs. PCL format.

The winner of this year’s game will again earn the right to have its champion play as the home team in the Gildan Triple-A National Championship on Tuesday, September 19 at the site of the Scranton/Wilkes-Barre RailRiders’ PNC Field.