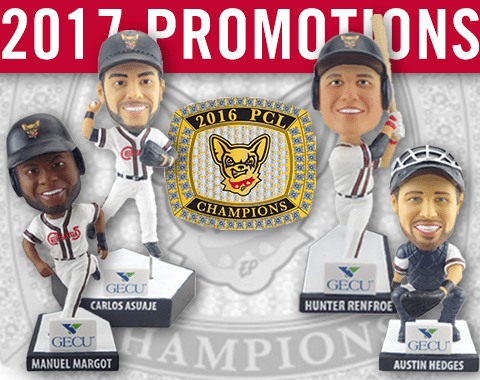 Baseball is the cake. Promotions, theme nights and giveaways are the icing, sprinkles and cherry on top. Here is the “sweet stuff” coming to Southwest University Park in 2017.

The season kicks-off on Thursday, April 6th at 7:05 p.m. against the Las Vegas 51s (New York Mets) as the start of a five game home stand. Join the Chihuahuas as they celebrate Championship Weekend, honoring the 2016 Pacific Coast League (PCL) Championship.

The Chihuahuas will host four giveaways in five games including rally towels, flat screen TVs, magnet schedules and will be headlined by the first premium giveaway of the season, a replica PCL Championship ring.

The first 2,000 fans through the gates on April 9th may get their very own replica Championship ring, courtesy of Southwest University.

2016 fan favorites Carlos Asuaje, Manuel Margot, Austin Hedges and Hunter Renfroe are returning to Southwest University Park in bobblehead form. The Core Four Bobblehead series, presented by GECU, will honor the All-PCL Chihuahuas players from last season on May 15th, June 26th, July 24th and August 14th, respectively. Fans are encouraged to collect all four as the bases fit together.

Kids Day Sundays will feature an eight-part giveaway, Build-A-Chihuahuas-Uniform set, exclusively for children 12 & under. On select Sundays, the first 1,000 kids in attendance with paid admission may receive a new item in the set to complete a Chihuahuas uniform.

Kids will be treated to giveaways such as a replica jersey, kids glove, sunglasses and Chico cap.

Also on the docket for 2017 are the extremely popular fleece blanket giveaway on April 19th and a Chihuahuas team card set on August 30th.

The Chihuahuas are planning numerous fun theme nights during the 2017 season. Fans can walk the plank and enjoy the Pirate’s Life on May 20th for Pirate Night.

Whether fans like the hip-hop or grunge rock scene, El Paso will be throwing it back to the 90’s on June 3rd so get your windbreaker and ripped jeans ready. And on August 12th, Way Out West Fest Night will be returning this season for an ‘ol country good time!

New to the Chihuahuas Day of the Week promotions lineup are Salute to Services Thursday and Flat Screen Friday.

On Thursdays starting on April 20th, the club will thank all military and first responders, past and present, for their commitment to the community.  To receive the special rate of $10 ticket in Zone E and enjoy the Thrifty Thursday specials, service members will simply need to present the appropriate ID.

New to Fetch the Fun Friday, the Chihuahuas will be giving away four flat-screen TVs at each of its 14 Friday home games! There are unlimited ways fans will be able to win these TVs: dance contests, social media trivia, rock/paper/scissors and more! Contestants will have to be present at the game to win!

Day of the Week Promotions Breakdown:

Stay tuned for more “sweet stuff” that will be announced as we lead up to Opening Night and even throughout the season! For information on group rates, hospitality areas, Season Seats and Paw-tial Plans, call (915) 533-BASE or visit EPChihuahuas.com.

A full list of theme nights can be found below.  All giveaways are one per person with paid admission. Guests must be present to receive a giveaway. All promotions, themes, and dates are subject to change.