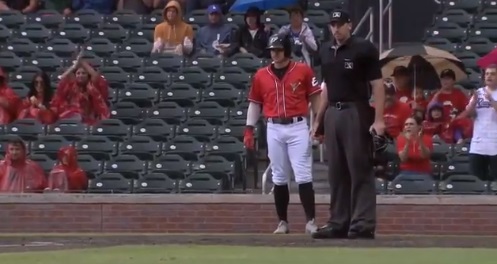 Sunday night’s Chihuahuas game versus the Round Rock Express (Texas Rangers) was suspended due to inclement weather.

The suspended game will pick up in the top of the fifth inning and will be played to a nine-inning completion.

The game regularly scheduled for tomorrow, Monday, June 28, will follow the completion of the first game and, per Major League Baseball rules, will be seven innings.

Fans with a ticket for June 28 will be allowed to attend both games.

Beginning tomorrow at 10 a.m., patrons may exchange a paid ticket for tonight’s game for a ticket of equal or lesser value to a remaining 2021 Chihuahuas home game, based on availability.

This exchange must take place at the Southwest University Park box office.

Monday’s game includes Military Monday presented by Prudential, Seniors Eat Free presented by Conviva Care Center, the Pepsi Family Pack, and 10% off in the Chihuahuas Team Shop for all active-duty military and veterans with ID.

The game was suspended at the top of the fifth inning with Round Rock leading the Chihuahuas, 3-2.