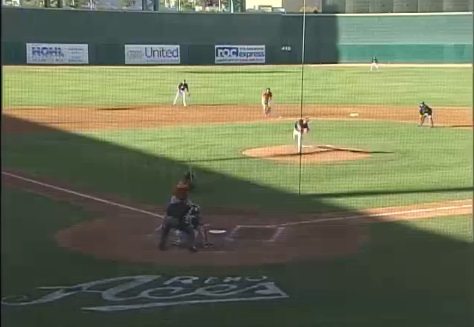 Robbie Erlin pitched a complete game shutout in the first game of Saturday’s doubleheader, as the El Paso Chihuahuas beat the Reno Aces 10-0. It was Erlin’s first professional shutout and the first shutout by an individual pitcher in Chihuahuas’ history.

It was El Paso’s first complete game this year and the second in Chihuahuas’ history (Michael Nix, 2014 in Tacoma).

The Chihuahuas scored four runs in the second inning on RBI singles by Cody Decker and Casey McElroy and a two-run triple by Hunter Renfroe, his second triple in as many games. The Chihuahuas later scored six runs in a ten-batter seventh inning to put the game out of reach.

A strong start and a productive second inning also carried the Chihuahuas in the second game Saturday. Aaron Northcraft allowed only one run in a five-inning start in El Paso’s 4-2 win over Reno.

The Chihuahuas scored four times in a nine-batter second inning that included an RBI single by Robert Kral, a bases loaded walk by Northcraft and a two-run double by Casey McElroy.

El Paso starting pitchers combined to surrender only one run in 12 innings Saturday. The Chihuahuas are now 8-2 in doubleheader games this season.

The Chihuahuas currently have a magic number of two, as the Las Vegas 51s beat the Tacoma Rainiers Saturday night at Cashman Field. El Paso and Las Vegas have identical 77-65 records with two games to play in the regular season. If the two teams finish with the same record, the Chihuahuas win the division because of their head-to-head record tiebreaker advantage.