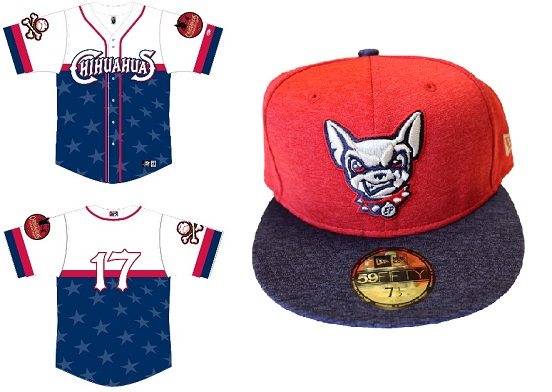 It’s a Fireworks Spectacular! as the Chihuahuas celebrate America’s birthday with the unveiling of the Stars and Stripes jerseys and caps to be worn during the July 1st, 2nd and 3rdGECU Independence Day Celebration games.

The jerseys will accompany the best fireworks in El Paso beginning with a postgame Fireworks Spectacular presented by KVIA and KISS FM on July 1st, a special fireworks presentation on July 2nd and an extended postgame fireworks program on July 3rd.

Sunday’s celebration will also feature the Bank of America Manager for the Day where the Chihuahuas will recognize a former veteran as submitted by fans.

Made by OT Sports, the jerseys showcase the patriotic red, white & blue colors. The jersey features a white color block on the top half of the bodice and blue across the bottom covered in opaque stars. Red piping separates the two halves. The sleeves are white with red and blue trim.

The Chihuahuas will auction the game-worn Stars and Stripes jerseys on July 3rd, with proceeds benefiting the El Maida Shriners and the Chihuahuas Foundation.

The New Era 59FIFTY fitted Stars and Stripes cap, which made its initial debut in 2008, can be seen across Minor and Major League Baseball during the Independence Day weekend around the country. In addition to the fitted caps, the Chihuahuas Team Shop will also offer adjustable caps for the first time.

Season Seat Holders will be granted early entry into the Wednesday, June 28th Chihuahuas game with the option to purchase the cap beginning at 5 p.m. at the Chihuahuas Team Shop on Durango. The cap will be made available to ticketed fans at 6 p.m. when gates open. Sales will open to the general public on Thursday morning, June 29th at 10 a.m. Limited quantities of caps are available.

Men’s and women’s patriotic-themed shirts as well as other merchandise are available now in the Chihuahuas Team Shop located on the corner of Durango and Franklin.

Gates for the July 3rd GECU Independence Day Celebration open at 5:30 p.m. with first pitch at 7:05 p.m. Fans are encouraged to arrive early for the pregame festivities.

The Chihuahuas are offering special rates in Zone E, K, L and Standing Room Only for military members past and present with ID on July 2nd and 3rd. Tickets may be purchased at the Durango Box Office or online at GovX.com.

The GECU Independence Day Celebration is at the tail end of an eight-game homestand. The homestand opens with a four game slate versus the Sacramento River Cats (San Francisco Giants) on Monday, June 26th.

The GECU Independence Day Celebration is part of a four game series against the Reno Aces (Arizona Diamondbacks).

Advanced purchase for the home series is encouraged. Purchasing early also gives fans a savings versus walk-up prices. Fans can buy tickets at EPChihuahuas.com or in person at the Durango or Santa Fe Box Offices (opens at 2 p.m. on gamedays only). The Durango Box Office is open Monday–Friday, 10 a.m.-5 p.m.