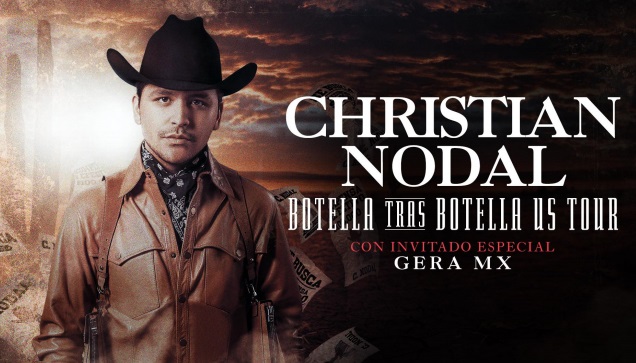 The tour kicks off September 14th, 2021 at Las Vegas’ Zappos Theater at Planet Hollywood with stops in Atlanta, Chicago, Los Angeles, and more before wrapping up in Phoenix at the Arizona Federal Theatre on December 19th.

The tour is named after Nodal’s Global viral hit “Botella Tras Botella,”which debuted at #1 on Spotify global chart and is the highest chart position for a song by a Mexican Artist. It has over 146M streams on YouTube alone and is the first Regional Mexican title to enter the Billboard Hot 100 in its almost 63-year history.

Christian Nodal’s entire discography (3 albums) is positioned in the Top 15 of Billboard (Regional Mexican Albums). He was named the #1 Regional Mexican solo artist of all time on Apple Music.

Additionally, the single that led to his meteoric rise, “Adios Amor”, is the #1 Regional Mexican song of all time on Apple Music.