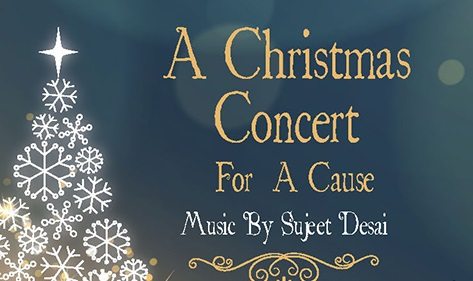 GiGi’s Playhouse, El Paso’s premiere advocate for individuals living with Down Syndrome and their families, is pleased to welcome world renown musician Sujeet Desai as its main performer of the upcoming Christmas Concert For a Cause.

Desai, a talented musician who has Down Syndrome and has been featured in international concerts, will be performing a concert where he will be playing the piano, violin, and clarinet, for this special evening aimed at raising awareness of individuals living with Down Syndrome and the services GiGi’s Playhouse provides the community.

“Sujeet is such an inspiration and it’s an honor to be able to have him perform in El Paso for such an important cause,” said Maggie Morales-Moody, the Concert Chairperson for Gigi’s Playhouse El Paso. “Through his music and his advocacy, Sajeet has brought attention to those who live with Down Syndrome. It’s an important message, and we hope El Paso comes out to hear.”

Sujeet has been featured in the Wall Street Journal and TIME magazine as well as on TV shows including The View, 20/20 and the Oprah Winfrey Show. His highest musical achievement was his Carnegie Hall debut in 2015 with a standing ovation. He has performed in over 40 states and 13 countries.

The concert is at 7 p.m. on Saturday, Dec. 10, at the Scottish Rite Temple, 301 W. Missouri. Tickets are $25 and include a glass of wine and hors d’oeuvres. Children under 5 enter free of charge.

El Paso’s Gigi’s Playhouse Achievement Center opened in April 2015 and was the first in Texas. GiGi’s Playhouse is a one-of- a-kind achievement center for individuals with Down Syndrome, their families, and the community.

GiGi’s Playhouses throughout the country offer more than 30 therapeutic and educational programs that advance literacy, math skills, motor skills and more; all of which are free.