Lee and Bobby Byrd, founders of Cinco Puntos Press, wrote the last chapter in their publisher’s story last weekend, as they announced the sale of the literary assets to Lee & Low Books, a New York-based publisher.

While this closed the book on the El Paso-based book icon, the publishing legacy of the Byrds will continue with hundreds of stories that entered through the doors of Cinco Puntos.

The publisher was founded in 1985, in the heart of the city and just a few miles away from Juarez, unaware that they would later become a medium in telling the story of La Frontera.

While the journey of Cinco Puntos has not finished, the publisher will have a new home in the Big Apple, roughly 2,000 miles away from the land where the sun always shines.

“Yes, we are sad that Cinco Puntos is leaving El Paso, but instead of disappearing, Cinco Puntos will be an imprint of their company,” said Bobby Byrd.

Ironically, the day the Byrds made the announcement, the City of New York warned of a week-long heatwave of over 100 degrees. It could be a coincidence, but it seems that New York City is getting a taste of Cinco Puntos Press.

The smell of freshly ground coffee  engulfed the moment the Byrds hugged the literary family they built in Cinco Puntos, a family that shared the same love for letters and the arts.

And that through the years helped uplift a project started by a novelist and a poet. 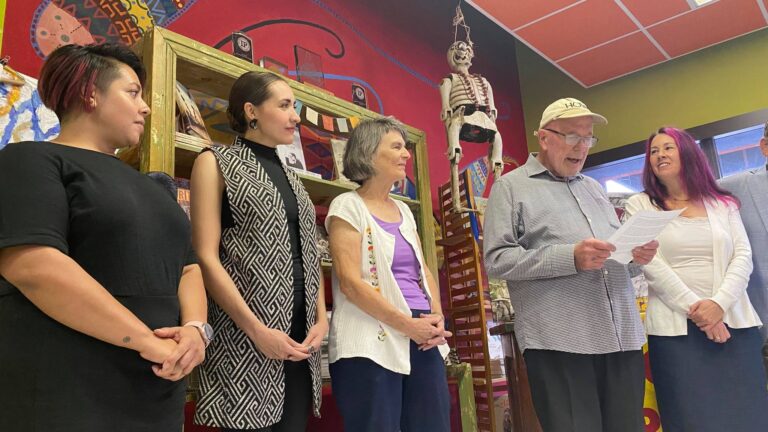 The two become one

When they started this project, the Byrds “had little money” and three kids, and as Bobby described, “decided to become publishers late, as they were “lost and unhappy,” working as technical writers.

But the passion of Lee and Bobby never faded, creating a space for Chicanx and Paseñxs artists whose voices needed to be put into print; joined with distinctive art.

“Lucky for us, our good friend, graphic artist Vicky Hill, who is right down here, lived right down the street, and she knew how to design,” added Bobby.

Hill, who has been friends of the Byrd family, and now their daughters share a close friendship too, said she is happy to see her long-time friends in their new endeavor.

“They put in a lot of work. And now to live on. Hopefully, maybe retire. I’m happy for you.”

Thirty-six years later, the books Cinco Puntos brought to life have received numerous awards, including the American Book Award for Excellence in Publishing, as well as publishing grants from the National Endowment for the Arts, and an induction into the Latino Literary Hall Fame.

The Transition: First Book as Cinco Puntos Moves to NYC

Yasmín Ramírez’ ¡Andale Prieta! The book was written and edited by the Byrds and described this transition as “bittersweet.”

“I’m excited about it, but I feel like being here [at Cinco Puntos] gave it a wonderful start,” said Ramírez, who’s book is a memoir of the mixed experiences of growing up in the Borderplex region with her grandmother.

“I think that we take for granted when we move away, and then you come back [to El Paso], and you, you experience them all over again,” said Ramírez.

Another upcoming author, Narváez Varela echoes the sentiment Ramírez is experiencing as Cinco Puntos part ways from El Paso. Her book is a story of a 13-year-old girl living in Juárez who her 30-year-old son visits at the time of one of the first waves of femicides. Thirty Talks Weird Love touches on topics like mental health and, as she described it, is “at its core a semi-autobiographical story” told in poems.

Narváez Varela said her book found a home in Cinco Puntos Press due to the nature of the book itself. “[Thirty Talks Weird Love] is written bilingually; I knew that this was the place to do it because seeing those supports narratives of writers like me, writers doing something different.” 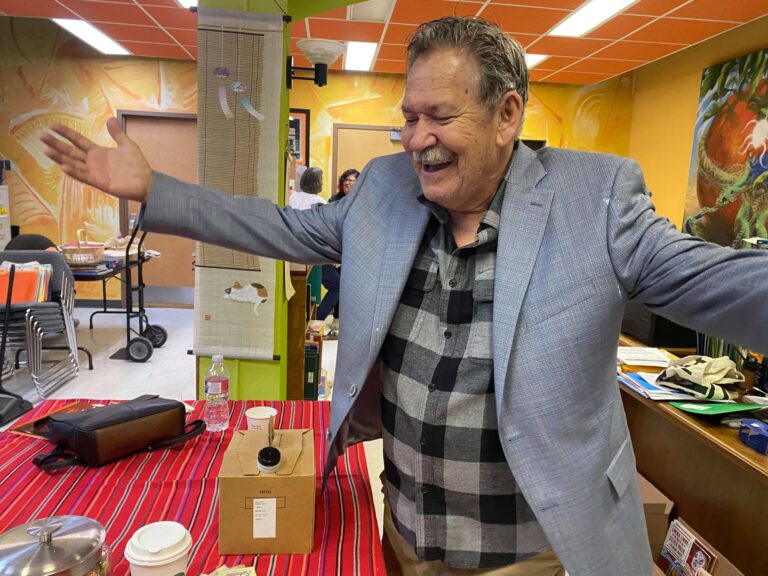 With watery eyes award-winning author Benjamín Alire Saenz, remembered all the stories he wrote alongside the Byrds’. And the recognitions and honors as a result of the encouragement of the Byrds and Cinco Puntos.

“It was nice, it’s nice to sit right next to your editor because that doesn’t happen,” said Sáenz

“Publishing a book had a different essence at Cinco Puntos; the Byrds made a personalized connection with the author as Sáenz described, “we just come over here and she [Lee] sat down, and she had questions.”

Sáenz said as a Latinx author, if he would have published his collection of stories, Everything Begins & Ends at Kentucky Club would not have won the 2013 PEN/Faulkner Award for Fiction.

Lastly, the Byrds recognized the power of being a one-of-a-kind publisher and portraying the love and life for the U.S. – Mexico Border narrative.

“[It was our] strength and weakness because we are so far away from the publishing and intellectual centers of the east and west coast. But our strength is right here because we see… because we see the world from the lens of love from here in El Paso, on the U.S. Mexico border.”