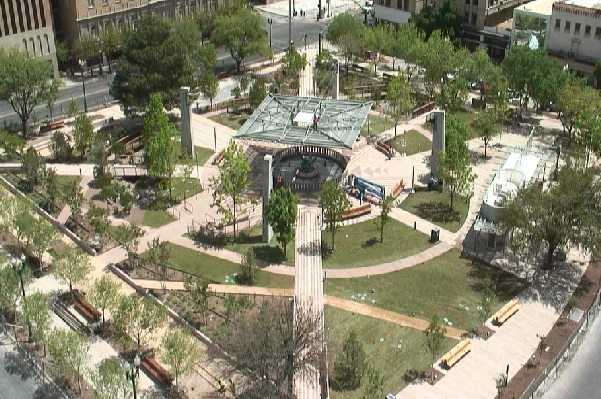 In what was more of a pep rally than a news conference, city officials announced on Wednesday the plans for next week’s opening of San Jacinto Plaza.

Surrounded by several city mascots, Mayor Oscar Leeser announced that the much-anticipated opening of the city’s plaza would be a daylong party.

“This project…they’ve done an incredible job with it,” Mayor Leeser stated, “in my opinion it was all very much well-worth the wait.”

Leeser added that the city’s entire staff was driven to make sure the entire project was done properly. He credited City Representative Cortney Niland for championing the community’s vision of what San Jacinto Plaza should be, and making sure the contractors stuck with it.

“She made sure the community was getting exactly what it voted for…no compromises…so this could be the top class park in El Paso,” Leeser added, “She counted every blade of grass that went in down there…”

For her part, Representative Niland said there were not enough superlatives in the dictionary to describe the revamped Plaza.

“This work had to be done correctly…the community is passionate about San Jacinto Plaza and what would go into the project,” Niland excitedly shared with the small crowd in City Hall’s Foyer, “we had to keep the things that made the Plaza what it was, but modernize it.”

Niland said that the city spared no expense in making sure everything was correct, as she personally walked through the project nearly ever week to make sure the citizens got what they paid for.

She even referenced the project’s numerous delays by saying, “(It’s) so good…I forgot all the pain, all the agony…I got tears in my eyes as I walked around…it’s shines like a new penny in the heart of the city.”

“If I had known it was going to be this good, I would have waited two more years,” Niland

added, as the group laughed.

Mayor Leeser said there was no final price tag on the entire project, but the original figure of $6 million was correct; pending the final review of the project’s ‘punch list’ and discussion of the fines due to the project’s delay.

As for the celebration, Ben Fyffe of the City’s Museum and Cultural Affairs Department, said the party would represent all the excitement and color that San Jacinto Plaza is.

“This whole project has been a labor of love, and we’re excited for the reopening,” Fyffe said, “to that end there will be plenty of excitement in and around the Plaza all day Saturday.”

Fyffe said the dedication is scheduled to start at 9:30 a.m., followed by a fiesta that will run from 10 a.m. to 7 p.m.  There will be street performers, music and interactive art that visitors can help make and take home.

With the reopening of San Jacinto, El Pasoans will be able to use the area during the upcoming downtown events, and again as much-missed original location of the Downtown Christmas Parade and Tree Lighting in December.

Officials said there were some last-minute touches – such as replanting the few flowers that did not survive the winter and the final inspection of the restaurant – but that there was nothing that would keep the Plaza from reopening on the 16th of April.