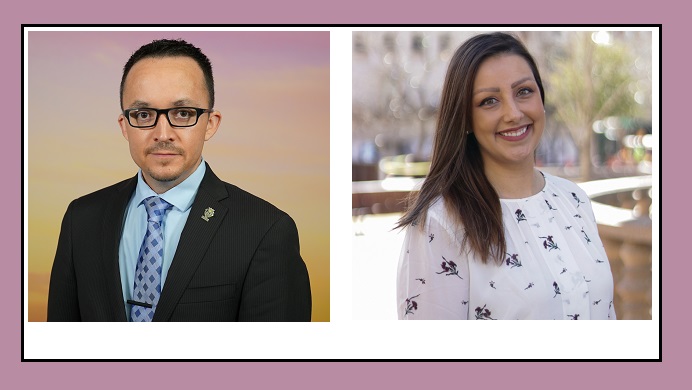 Triggs will replace Economic and International Development Department Director Jessica Herrera, who is stepping down to take a position with another organization.

“David and Elizabeth have both played key roles in championing economic and international development in El Paso and our tristate, binational region. We are certain that they will bring the same commitment to their new roles and help build upon the foundation and initiatives spearheaded by Jessica during her extremely successful tenure with the City,” said City of El Paso Chief Operations and Transportation Officer Sam Rodriguez.

The City of El Paso in recent years took a new approach to managing its international bridges to grow the local economy and enhance the border crossing experience. Economists and planners were brought into the international bridges department to advance economic development efforts while analyzing and sustaining real-time data related to bridge traffic and peak challenges.

Those efforts along with a Lean Six Sigma (LSS) project resulted in the City obtaining $32 million in funding from the state for intelligent transportation system projects, which should serve as catalysts for economic development.

City officials say that Friday’s appointments will “bolster the collaboration between the international bridges and the economic development departments.” They add that this new alignment combined with the activities at the El Paso International Airport will form a more “targeted approach to business expansion and business relocations based on trends and market studies in an effort to yield higher wages and jobs.”

Coronado has lead the International Bridges Department since 2018 and during that times has established and strengthened relations with the Mexican Government, Business Officials, Maquiladoras, and other entities in the region.

Prior to joining the City, Coronado worked at the Institute for Policy and Economic Development at the University of Texas at El Paso where he conducted economic impact studies for Base Realignment and Closure (BRAC), industry cluster analysis and several other initiatives to assess the value of economic development projects in the region. He also has extensive experience in planning, having served half a decade at a senior level in the Planning and Inspections Department.

As the Director of our International Bridges Department, he has fostered extensive relationships with stakeholders at the Federal and State level and has forged great partnerships with key stakeholders in Mexico. Coronado earned a Masters of Public Administration in Economic Development and a Bachelors of Business Administration in Economics and Finance from the University of Texas at El Paso. He is a certified member of the American Planning Association and American Institute of Certified Planners, and is an accredited member of the Congress for New Urbanism. He is also a Certified Lean Six Sigma Green Belt.

Triggs has repeatedly demonstrated her leadership throughout her nearly decade long service to the City. She currently serves as the Strategic Partnerships Officer and previously served as the Assistant Director of International and Economic Development.

During her tenure as the assistant director, she focused on real estate development through public-private partnerships and the use of targeted finance tools such as tax increment finance and special assessment districts. Prior working on economic and international development, Triggs worked in various divisions of the Planning and Inspections Department where her responsibilities included land development permitting and business licensing process management, regulatory analysis, code development, and long range and small area planning.

Earlier in her career, she also worked for an economic and policy research arm of the University of Texas at El Paso where she led and assisted in survey research and economic and fiscal impact studies used to inform local and regional public policy decisions. She is accredited by the Congress of New Urbanism and holds a bachelor’s degree from the University of Texas at El Paso in Economics and Political Science.

For more information on the City of El Paso, click here; for our complete coverage, click here.