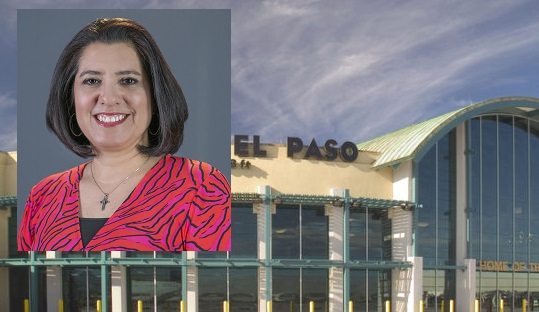 In her new role, Lombraña will lead the City’s efforts to align land and aviation services to enhance travel, commerce and trade.  The City is rethinking its approach to the impact made by the airport and international bridges because first impressions are critical to economic development. The airport is El Paso’s front door to those traveling by air, and the international bridges are the gateways to our neighboring country of Mexico.

“Ms. Lombraña is a proven leader. Through her various management positions, she has made significant contributions to the City of El Paso that have advanced transportation, fiscal management, aviation, economic development and capital improvement projects,” Gonzalez said. “I am confident that she will continue to be a champion for our community.”

Lombraña currently serves as the Director of Aviation for the El Paso International Airport, a position she has held since 2009. She previously managed the airport while serving as Interim Director of the City’s Capital Improvement Department.

She will take over management of the city’s three international bridges from International Bridges Director Mathew McElroy, who has accepted a position in the private sector. An Interim Director of Bridges will be appointed.

Lombrana will continue to oversee all aspects of the management, development, operation and maintenance of the El Paso International Airport.

She joined the City of El Paso in 1994 and has worked in various departments, including Comptroller’s, the Office of Management and Budget, and Contract and Compliance. Prior to being appointed Aviation Director, she served as Assistant Director of Planning and Development and was responsible for the development and implementation of the airport’s Capital Improvement Program and grants administration.

Lombrana is an Accredited Airport Executive and member of the American Association of Airport Executives, is on the 2017 Airports Council International-North America Board of Directors, and is Immediate Past Chair of the Texas Commercial Airport’s Association. She earned a master’s degree in business administration from Webster University and a bachelor’s degree in management from Park University.