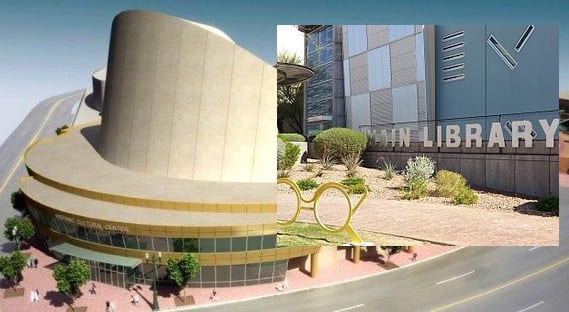 On Tuesday, officials with the City of El Paso announced that they are considering integrating the Mexican American Cultural Center (MACC) into a 40,000 square foot wing of the Main Library located within the Downtown Arts District.

Via a news release, officials said the site proposed by the City of El Paso for the MACC “offers twice the amount of programmable space than the Abraham Chavez Theater at half the cost.”

“Main Libraries 100 years ago served a different function as the only choice in town. Cities throughout the country have taken the opportunity to re-imagine prime real estate/ architectural assets by incorporating new complimentary program opportunities and cultural assets into their library systems. The additional programming the MACC will provide will enhance our Library services while allowing the City to maximize its resources,” said Dionne Mack, Deputy City Manager, Public Safety and Support Services.

“The plans for siting the MACC in the addition to the Main Branch presents incredible opportunities to amplify programming and services we offer to the community. Amenities like a broadcasting studio, archive reading rooms and teaching kitchens represent cutting edge practices that libraries across the U.S. are incorporating to engage new audiences,” said Mark Pumphrey, Library Director.

The City is hosting an open house on Thursday, September 13, from 5:30 to 7:30 p.m. at the El Paso Museum of History (510 N. Santa Fe) where the public can view preliminary ideas and concepts for the Mexican American Culture Center.

Included in the Tuesday news  release were the city’s reasons for the new, alternate site, including:

“The proposed site is primed for success dovetailing with so many public and private developments taking place in the Downtown Arts District. We can’t wait for a permanent facility to showcase the breadth and vitality of Mexican American cultural production,” said Tracey Jerome, Director of the City’s Museum and Cultural Affairs Department.

According to city officials, from the “earliest stages of planning in 2014, seeking shared space for the MACC was something City leadership and consultants felt made the most sense, given the budget of the MACC and the ambitious programming MCAD envisioned.”

“Selecting the Main Library returns to this model and will create a dynamic experience for visitors to the Arts District. Additionally, close proximity to the El Paso Museum of History, the El Paso Museum of Art, ArtSpace El Paso and the site of the future El Paso Children’s Museum will help facilitate easy collaboration and partnerships,” officials added.

The Tuesday afternoon release from the city goes on to say that, “although the City was not able to reach an agreement with the Mexican American Cultural Institute (MACI) to manage the MACC, leadership continued to work with MACI’s leadership to include them in the project.”

“As the plans to locate the MACC at the Library solidified, the City shared these plans with MACI’s leadership. They were in support of the project’s new direction. The City had continued to work with MACI to forge a relationship that would provide ongoing support for the MACC; however, they were unable to come together on an agreement that would be beneficial to both parties.”

The MACC is one of three signature projects approved by voters as part of the 2012 Quality of Life Bond.