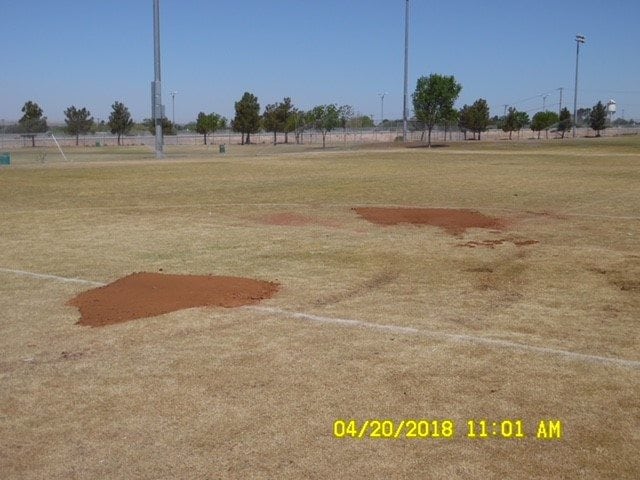 After a complaint received by the City’s Parks and Recreation Department about field conditions at the Westside Sports Complex following a recent weekend of soccer matches, officials sent crews to work on the situation and they released a statement explaining the situation.

According to the news release, the fields at the complex have “suffered from a lack of watering resulting from its water supply being shut down to allow for major repairs to address leaks in the complex’s irrigation system. Parks maintenance crews and the El Paso Water Department have completed inspection and repairs of the system.”

“The department has assigned its most experienced crews to the complex and they are following a three-week schedule of maintenance that includes filling in holes, aeration, fertilizing, and applying foliar nutrients,” the release continued.

City officials added, “Parks and Recreation appreciates the public feedback about the field conditions and apologizes for the deterioration of the turf due to a lack of watering. The department is responding by intensifying maintenance efforts to bring back turf conditions to levels acceptable for playing conditions. Crews will also fill holes and low areas to enhance safety.”

Parks and Recreation “asks for the public’s patience while crews work to restore the turf damaged by the faulty irrigation system.”

The department is also asking the community to report problems with playing fields and other parks and recreation facilities directly to them by calling 311.