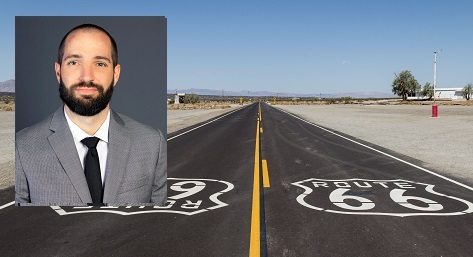 Assistant Professor Jeffrey S. Weidner, Ph.D., from The University of Texas at El Paso’s Department of Civil Engineering has been awarded a grant from the National Park Service, Route 66 Corridor Preservation Program.

Weidner and his undergraduate students will work on a project titled “Bridge Prioritization and Preservation along Route 66.” The historic roadway is one of the original highways in the U.S. highway system.

The route runs from California to Illinois, spanning eight states and covering nearly 2,500 miles of land.

The project is underway and has two main goals. Weidner and his team will look at bridge preservation from an engineering perspective and from a historical preservation viewpoint.

By examining both, Weidner hopes to make research decisions on a leveled playing field.

“I’m excited that my students will be able to learn about historical structures and bridges,” Weidner said. “By using engineering assessments for these structures, we hope to help each state along Route 66 to preserve historically significant bridges that normally would be torn down and replaced due to age. I look at this project as an opportunity for me to learn more about preservation.”

The team will use $32,000 over the course of the next year to conduct the research.