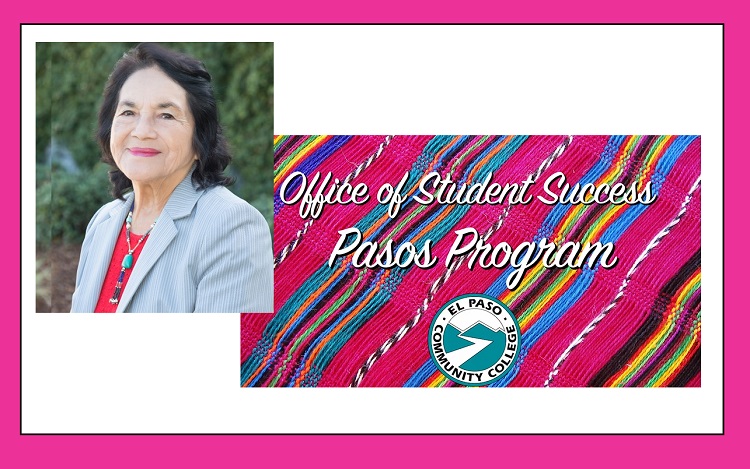 Student and community members alike will have the opportunity to hear labor leader and community organizer Dolores Huerta this week, thanks to a virtual presentation as part of El Paso Community College Pasos Program.

Huerta, who co-founded the United Farm Workers of America with César Chávez and is the president and founder of the Dolores Huerta Foundation, will take questions from El Paso Community College students and community at 5:20 p.m. Thursday, April 1, in a virtual presentation.

She has fought civil rights and social justice for more than 50 years. In 1962 she and César Chávez founded the United Farm Workers union. She served as vice president and played a critical role in many of the union’s accomplishments for four decades.

In 2002, she received the Puffin/Nation $100,000 prize for Creative Citizenship, which she used to establish the Dolores Huerta Foundation (DHF).

DHF connects groundbreaking community-based organizing to state and national movements to register and educate voters; advocate for
education reform; bring about infrastructure improvements in low-income communities; advocate for greater equality for the LGBTQ community; and create strong leadership development. She has received numerous awards, including the Eleanor Roosevelt Humans Rights Award from President Bill Clinton in 1998.

In 2012, President Barack Obama bestowed Dolores with the Presidential Medal of Freedom, the highest civilian award in the United States. She was also named one of USAToday’s “Women of the Century” and won Glamour’s “Women of the Year” Award.

The EPCC Pasos Program – College of the Community Celebration of Community Action is an annual celebration commemorating César Chávez Day in the month of March.

EPCC Pasos Program brings together motivated educators and a community that view our location, population, and stories as assets to student success.

College officials share that Pasos is dedicated to advancing our US/Mexico border community through family engagement, equity in the classroom, inclusion, and social justice. We will increase civic engagement through educational, creative projects, service learning, and community activism.

The presentation is free and open to the public; and can be joined via this link.  College officials say for best connection: Windows user, Microsoft Edge is the best browser to use. If you are a Mac user, Safari is best. For Chromebooks, use Firefox.

For more information about the virtual events held this month, click here.