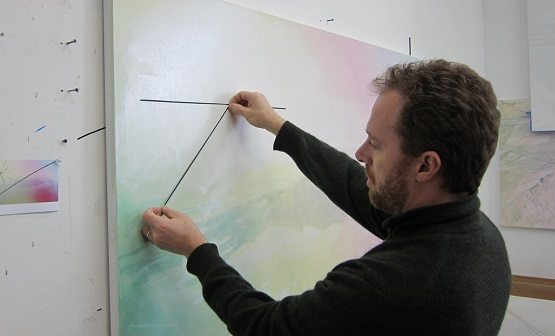 New York City-based artist Eric LoPresti will be in Las Cruces October 8-10 after a visit to the Trinity site in preparation for his exhibition at the University Art Gallery at New Mexico State University in 2018 titled “Superbloom.”

LoPresti will give an artist lecture about the project at 5:30 p.m. Tuesday, October 10 at NMSU’s Hardman and Jacobs Undergraduate Learning Center, Room 125.

LoPresti grew up near the Hanford Nuclear Site, a decommissioned nuclear production complex by the government in the state of Washington, where the U.S. manufactured plutonium for the Nagasaki atomic bomb.

Since 2010 nearly all of his representational and abstract paintings have spoken about the effects of the Cold War and nuclear testing on the American landscape.

In his September 2018 exhibition in the University Art Gallery, he will reference and explore the nuclear testing sites in Nevada and New Mexico, indigenous desert flowers and the harmonizing Japanese practice of aikido.

“Sited a mere 97 miles from Trinity, location of the first atomic bomb, the exhibition will outline an expansive framework within which viewers can meditate on two increasingly relevant antipodes of human experience: the quest for aesthetic expression, and the threat of global apocalypse,” said Marisa Sage, UAG director and curator.

In “Superbloom,” LoPresti explores this complex relationship through large paintings, a two-channel video and a sequence of performances incorporating local martial artists.

Although the works of “Superbloom” span different mediums, they are united by a common impulse to employ formal aesthetic practices such as painting and martial arts sparring to frame the large and terrifying problem of nuclear weapons within a continued reference to the natural beauty of the regional southwest landscape.