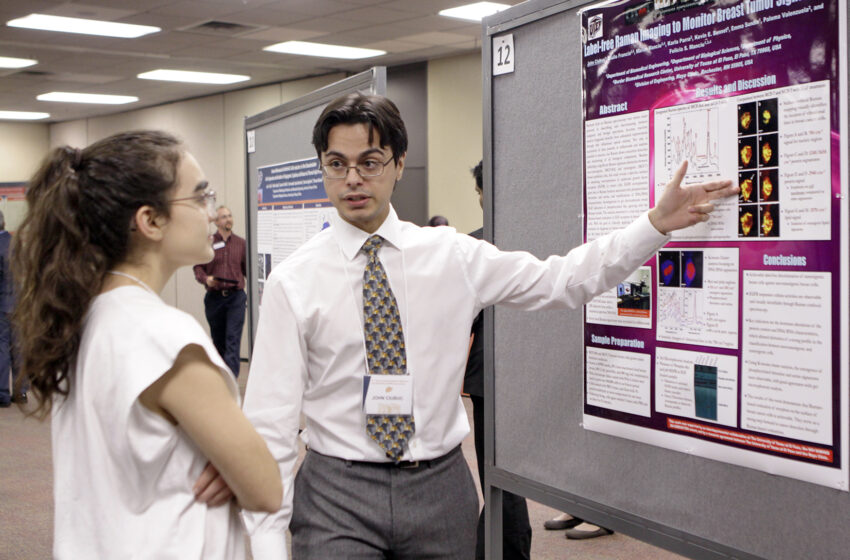 Change is apparent throughout The University of Texas at El Paso campus. New buildings and updated roads are in the works, with plans for more.

There are also new facilities, new deans and new coaches. But one particularly profound change has quietly been taking place in classrooms, labs and offices across the University for several years now.

“It’s a new way of thinking; it’s looking at the University differently,” said Ann Gates, Ph.D., professor and chair of the Department of Computer Science, referring to the growth of interdisciplinary research and education (IDRE) at UTEP.

Interdisciplinary research, also known as collaborative research, is a way of tackling a problem through an integrative approach; one that brings together the expertise and perspectives of people who work in different and, sometimes, seemingly unrelated disciplines.

The practice of collaborative research at UTEP is not new, but thanks to the work of individuals such as Gates, it is an idea that has seen clear growth in standing and acceptance.

“There is more awareness now of the range of the interdisciplinary projects that are occurring on campus,” said Andrea Tirres, interdisciplinary network manager in the Office of Research and Sponsored Projects (ORSP). “There are now also more prominent discussions about IDRE and the support that the University offers for interdisciplinary research in terms of things like equipment and policies.”

One initiative that has been essential in this effort is the annual UTEP IDRE Symposium.

Now in its sixth year, the most recent symposium was held in early November at the Tomás Rivera Conference Center. The event featured a series of poster presentations, a connector event that gave researchers an opportunity to discuss their projects with interested members of the audience, and presentations on best practices in collaborative research.

Another highlight of the event every year is an address delivered by a featured guest. This year’s special guest was Kevin E. Bennet, Ph.D., chair of the Division of Engineering, and co-director of the Neural Engineering Laboratory at Mayo Clinic in Rochester, Minnesota.

Bennet’s varied educational background, which includes a bachelor’s degree in chemical engineering, an MBA and a doctorate in engineering, made him well-suited to discuss the opportunities that collaborative research presents. He spoke about topics such as an artificial liver, magnetic stents and mechanisms of deep brain stimulation that his team developed through an interdisciplinary effort. Bennet also encouraged his audience, which was comprised of students, faculty and staff, not to be discouraged by the sometimes lengthy discussions that are necessary to bring collaborative projects to fruition.

“It’s that conversation that allows us to figure out what are the problems that need to be solved, and who are the people that are interested in working together,” Bennet said.

It’s a message that appears to be resonating with the UTEP research community. Having started in 2012 as a gathering for members of the faculty exclusively, the symposium now welcomes staff and graduate and undergraduate students who are engaged in or interested in participating in interdisciplinary research.

The growing popularity of the symposium is the result of a deliberate strategy to be as inclusive as possible. To this end, organizers this year expanded the membership of the symposium planning committee to include leaders from across the University. As a result, the latest committee included several department chairs, associate deans for research and an associate provost.

It’s a strategy that yielded the highest number of participants in the event’s six-year history. Approximately 125 presenters, speakers and guests took part.

Students made up a large portion of this year’s record number of participants, making it clear that the culture of collaborative research is gaining a foothold in colleges throughout the University.

“Collaboration is essential for true progress,” said John Ciubuc, a doctoral student in biomedical engineering. He was part of a team that presented a project at this year’s symposium that outlined a process to identify and distinguish between different types of breast cancer tumors through a process known as Label-free Raman Imaging. The project brought together students and faculty from physics, biological sciences and biomedical engineering. While the work did not reach a point where it can be applied in real-life medical situations, Ciubuc credited the progress the team was able to make to the diversity in its members’ professional and academic backgrounds.

“(Research) will not reach its full potential without collaboration occurring, because then, not only will others help you to see new perspectives on the project, but you can help others as well,” Ciubuc said.

The “E” in IDRE stands for education. Ultimately, proponents of collaborative research at UTEP say that’s what it’s all about: giving students the richest educational opportunities available in order to prepare them for a 21st century workforce.

“Interdisciplinary research gives students a sense of the application of their expertise in various fields, so it gives them some latitude to explore areas where they thought there wasn’t a connection, and it challenges them to be more creative,” Tirres said. “It also challenges them to think about the boundaries of traditional disciplines or problems that maybe are relegated to particular fields. So, it pushes their understanding of what the intersections are in approaching problems.”

Several other important developments across the University signal a continual rise for IDRE. One major example is the upcoming completion of the new Interdisciplinary Research Building (IDRB).

Expected to begin operations in 2020, members of the planning committee for the $85 million facility say it will offer a physical and a social space for students, faculty and staff from multiple academic areas to come together, meet and work jointly on a scale not seen to this day.

Another important example of the growing standing of collaborative research at UTEP can be found in the number of research grants and the dollars awarded to projects submitted under this category. In its Fall 2018 Research Forum, the University’s Office of Research and Sponsored Projects recognized four awards in the collaborative category totaling more than $8.7 million.

Proponents of collaborative research say it is one of the most effective ways to take on some of society’s most insidious and persistent problems.

With growing investment, and a rise in participation, standing and support for interdisciplinary work, UTEP researchers at all levels — faculty, staff and students — appear poised to be among the leaders in the search for solutions to some of the most important challenges of our time.